Insists on the need to renew the governing body of the judges and to undertake a reform of the model for the election of members. 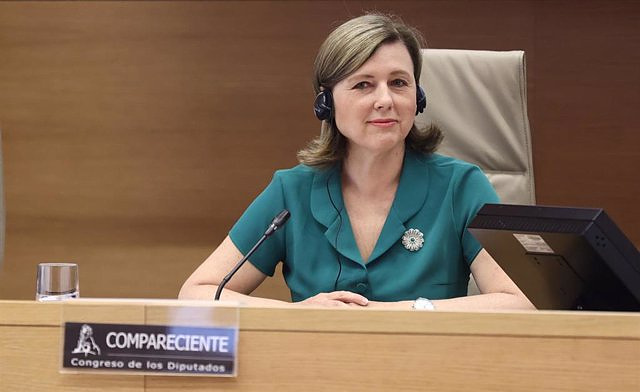 The vice-president of the European Commission, Vera Jourová, has shown her support for the president of the General Council of the Judiciary (CGPJ), Carlos Lesmes, and has warned that the "proper functioning of State institutions" --such as the governing body of the judges-- "should not be part of the political debate and even less be a hostage of that debate".

This has been underlined in a letter addressed to Lesmes in which he transfers his "coincidence" with the speech that the magistrate expressed during the opening of the judicial year, referring to the "urgency and absolute priority" of renewing the CGPJ and addressing then the reform of the model for appointing the members from the judicial shift, something that the European Commission considers necessary.

According to what the governing body of the judges has communicated, Jourová has made reference to the "desperate situation" in which the Spanish Judicial Power finds itself after almost four years in office and has recalled that a "prolonged blockade" that affects the correct operation of essential state institutions, such as the Judiciary, is "harmful to the rule of law" in Spain and, therefore, to "the State as a whole".

Along the same lines, he insisted that the position of the European Commission --"which has been repeatedly expressed"-- is that "Spain must proceed with the renewal of the CGPJ as a matter of priority and initiate, immediately after the renewal, a process with the objective of reforming the model for appointing the members of the judicial shift taking into account European standards", as already pointed out in the Report on the Rule of Law 2022.

In this sense, he has advocated that he "recover" the "full institutional normality" of the CGPJ so that the body can "adequately carry out the essential democratic functions that correspond to it."

The vice president of the European Commission has urged "all actors" to play a constitutional role in a "spirit of mutual loyalty and sincere cooperation, taking into account only the best interests of the democratic state and citizens."

In the letter, Jourová took the opportunity to thank Lesmes for the meeting they held last June in Spain, a meeting that, as he indicated, helped him "understand" the situation that the CGPJ is going through.

THE REQUEST OF LESMES

Jourová's letter takes place five days after Lesmes delivered his speech before King Felipe VI and other political and judicial authorities in the framework of the opening of the judicial year, the fourth with the CPGJ in office.

That day, the president of the governing body of the judges publicly requested the President of the Government, Pedro Sánchez, and the leader of the PP, Alberto Núñez Feijóo, to meet "urgently" to agree on the renewal of the Judiciary in the "next weeks", while threatening to make decisions he does not like if the Council is not returned to its full capabilities.

Lesmes called for an agreement that would put a "definitive solution" to the blockade situation that the CGPJ is going through, which he described as "unsustainable." As Jourová now warns, Lesmes insisted that the political scenario of recent years "is weakening and eroding the main institutions of Spanish Justice."

Last Friday, the deputy secretary of institutional action of the PP, Esteban González Pons, sent a letter to the Minister of the Presidency, Félix Bolaños, in which he offered the Government to renew the CGPJ and then undertake the reform of the election system of its members, based on a proposal prepared by the new Council of the Judiciary.

Speaking to the press from La Rioja, Bolaños responded to that letter from the PP and assured that it was "an attempt to face the gallery." In his opinion, if the 'popular' wanted to renew "really" they could call him by phone and "in one afternoon" carry out the unblocking of the government of the judges.

‹ ›
Keywords:
BruselasComisión EuropeaCGPJ
Your comment has been forwarded to the administrator for approval.×
Warning! Will constitute a criminal offense, illegal, threatening, offensive, insulting and swearing, derogatory, defamatory, vulgar, pornographic, indecent, personality rights, damaging or similar nature in the nature of all kinds of financial content, legal, criminal and administrative responsibility for the content of the sender member / members are belong.
Related News