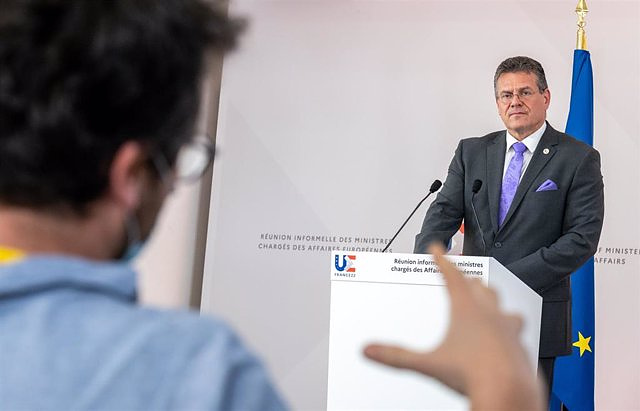 The vice president of the European Commission in charge of supervising relations with the United Kingdom, Maros Sefcovic, has offered to reduce customs controls in Northern Ireland, according to what he stated in an interview with the British newspaper Financial Times (FT).

Sefcovic has claimed that the trade border would be "invisible" to EU institutions if the UK provided real-time data on trade movements.

In this sense, it has indicated that physical controls will only be carried out in the event that "there is reasonable suspicion of illegal trade, contraband, illegal drugs, dangerous toys or poisoned food." Thus, this would mean that the controls were reduced to a "couple of trucks a day".

The Brexit chief for the Union has thus compared the demands of both parties, considering that there is no difference between the British request for "no controls" and the EU offer of "minimum controls, carried out invisibly".

Sefcovic has also expressed hope that the new British prime minister, Liz Truss, is ready to come to a common point on post-Brexit trade deals.

Negotiations between Brussels and London ended in February, but Sefcovic has said he is willing to restart talks. "We are ready to work openly, constructively and intensively," he said, welcoming Truss's statement this week that he wants a negotiated settlement.

Truss said earlier this week that she was willing to negotiate with community leaders, but only if the EU gave in to all British demands.

‹ ›
Keywords:
BruselasComisión EuropeaReino UnidoIrlandaUE
Your comment has been forwarded to the administrator for approval.×
Warning! Will constitute a criminal offense, illegal, threatening, offensive, insulting and swearing, derogatory, defamatory, vulgar, pornographic, indecent, personality rights, damaging or similar nature in the nature of all kinds of financial content, legal, criminal and administrative responsibility for the content of the sender member / members are belong.
Related News