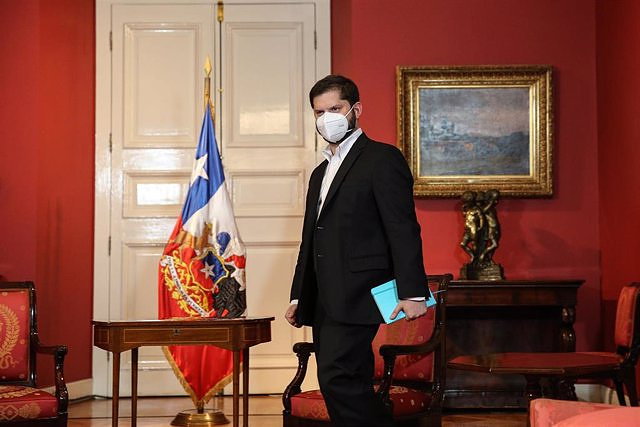 The Chilean president, Gabriel Boric, has met this Monday with the presidents of the Chamber of Deputies and the Senate of Chile after the rejection this Sunday of the draft constitution prepared by the Constituent Convention and has urged them to open negotiations to achieve a " institutional path" for the constituent process.

Boric is going to "convene the different parties with parliamentary representation, as well as actors from civil society, to listen to their points of view", explained the president of the Senate, the socialist Álvaro Elizalde.

"He has asked us to develop a dialogue in the National Congress that allows establishing an institutional path to advance in the constituent process," he explained.

Thus, Elizande has indicated that he and the president of the Chamber of Deputies, Raúl Soto, will convene this week all the parties with parliamentary representation "and we will also listen to other social movements and representatives of civil society, with the aim of promoting a dialogue that allows us to transmit certainty to Chile as soon as possible".

"The institutional path to fulfill the commitment to move towards a Constitution that is a factor of unity, among all Chileans. We hope to move quickly in this process, listening to the different views and proposals," Elizalde explained.

The goal is an inclusive dialogue that incorporates different views "to channel the constituent process." "We hope to reach an agreement as soon as possible to convey certainty to the citizens, regarding what the path and institutional itinerary will be to continue advancing in the constituent process," he stressed.

Elizalde made these statements after meeting with Boric and Soto for just under an hour at the Palacio de La Moneda, seat of the Chilean Presidency.

The meeting with Soto and Elizalde was announced by Boric himself in his speech on Sunday night, when the result predicted by the polls became clear and the text proposed by the Constitutional Convention was rejected by 61.86 percent of voters, according to official data from the Chilean Electoral Service (Servel).