Sánchez's "courage" with the penal reforms stands out and maintains that embezzlement has hardened "for those who embezzle". 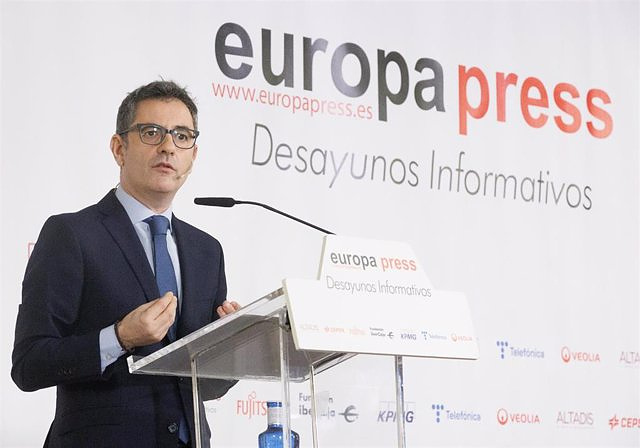 The Minister of the Presidency, Relations with the Courts and Democratic Memory, Félix Bolaños, indicated this Wednesday that a referendum or consultation in Catalonia would "chronify" the conflict and that the Government is in the stage of "wanting to overcome it".

He said this during his speech at an informative breakfast for Europa Press, when asked about the statements recently made by his partner in the Government, the Minister for Universities, Joan Subirats, in which he defended that the dialogue table in Catalonia should culminate with a query.

According to Bolaños, this type of referendum deepens the conflict in Catalonia, but that, nevertheless, the Government of Pedro Sánchez is in the stage of "overcoming it", although, as he has said, "there are nostalgics for the confrontation" on both sides.

In any case, the Minister of the Presidency has maintained that "it is an indisputable reality" that in Catalonia the situation is much better than it was in 2017, and that is the result of, in his point of view, "thanks to the agreements transversal".

In this context, Bolaños has repeated that "the tension" that occurred in 2017 in Catalonia will never be repeated, where he has listed the measures that produced the unilateralism of the Generalitat, and believes that the debate that is currently taking place it is whether the sovereignist process has finished.

And he believes, along these lines, that this 'procés' seems to be over, because, as he has said, "the situation in 2023 is different from that of 2017". The head of the Executive, Pedro Sánchez, already insisted this Tuesday in the debate in Congress that the 'procés' has ended because it was based on three issues that "no longer exist": "The independence unit, unilateralism and the confrontation in instead of dialogue".

Another of the aspects that Bolaños commented on during this informative breakfast was the penal reforms launched by the Government, such as the repeal of sedition or the reduction of penalties for embezzlement.

Here, the minister has valued the "courage" that, from his point of view, Sánchez has had to carry out these reforms of the Criminal Code, in addition to the pardons, with the aim of trying to reduce the conflict with Catalonia.

In this way, he has defended that the crime of embezzlement has been hardened for "the person who embezzles": "For the corrupt it is worse." Of course, after defending these reforms of the Penal Code, which he has insisted that "neighboring countries be approved", he understands that "now it is possible for the courts to interpret the new legal reform".

‹ ›
Keywords:
Félix Bolaños
Your comment has been forwarded to the administrator for approval.×
Warning! Will constitute a criminal offense, illegal, threatening, offensive, insulting and swearing, derogatory, defamatory, vulgar, pornographic, indecent, personality rights, damaging or similar nature in the nature of all kinds of financial content, legal, criminal and administrative responsibility for the content of the sender member / members are belong.
Related News