Accuses the PP of approving tax reforms to favor wealth and higher salaries. 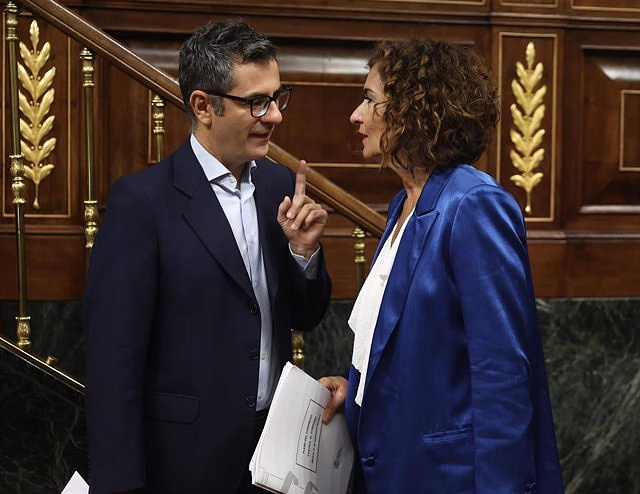 The Minister of the Presidency, Relations with the Courts and Democratic Memory, Félix Bolaños, has indicated this Wednesday that the criterion in terms of taxes is set by the Minister of Finance, María Jesús Montero, when asked about the request made by the head of Security Social, José Luis Escrivá to centralize taxes.

Bolaños has expressed himself in this way when questioned about whether Escrivá was wrong with his request, in statements to the media in the corridors of Congress.

In addition, on whether the Government has among its plans to undertake fiscal harmonization, after Andalusia announced the abolition of the wealth tax, it has indicated that the Government's position is "the one it has been maintaining for months" and that it has nothing to do with with the latest tax reductions of the PP to the highest assets.

Along the same lines, he has accused the PP of defending "without complexes" people with higher salaries and assets. "The PP defends who it defends, it has no problem making it public as it did yesterday," he pointed out.

In this way, the abolition of the wealth tax announced this Tuesday by the president of the Andalusian Government, Juanma Moreno, which benefits those who have assets of more than one million euros, has been disfigured, as indicated by the minister. Next, he has criticized the scholarships for families "who earn more than 100,000 euros", referring to the measure approved by the Community of Madrid, also governed by the PP.

"These are tax reductions aimed at the usual people, at the wealthiest and highest incomes, those people the PP defends," said the minister, who has warned the "remaining 95%" of the population to be clear that the The main opposition party "neither defends them nor will it ever defend them" and, on the contrary, harms them with its fiscal policy.

Finally, he added that the part that is saved for people with "very high" assets or salaries, is money that does not enter the public coffers to hire public servants so that the Welfare State is stronger, he has settled.

‹ ›
Keywords:
AEATSeguridad SocialMaría Jesús MonteroEscriváFélix Bolaños
Your comment has been forwarded to the administrator for approval.×
Warning! Will constitute a criminal offense, illegal, threatening, offensive, insulting and swearing, derogatory, defamatory, vulgar, pornographic, indecent, personality rights, damaging or similar nature in the nature of all kinds of financial content, legal, criminal and administrative responsibility for the content of the sender member / members are belong.
Related News