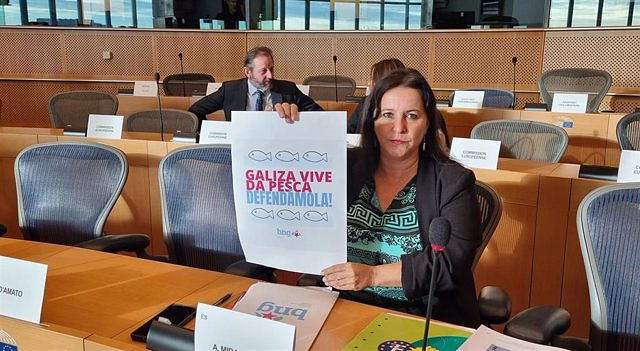 The MEP of the BNG Ana Miranda denounced this Thursday in the Fisheries Committee of the European Parliament the "inadmissible" consequences of the veto on bottom fishing in 87 Atlantic fishing grounds adopted by the European Commission.

"I regret having to start my work in the Fisheries Commission by rejecting the unilateral decision taken on September 15", said Ana Miranda in a speech in which she stressed that for the Galician fishing sector this is an "unacceptable" measure, be adopted "without taking into account socioeconomic criteria".

"The Commission really does not know the serious consequences that this decision has for the Galician fishing sector," said Ana Miranda, who pointed out that fishing in Galicia accounts for almost 6% of GDP and that this measure affects 200 capital ships Galician and 900 indirectly, with more than 4,000 crew members affected.

It also placed the economic impact at almost 900 million euros, with the ports of Vigo, Ribeira, A Coruña and Celeiro being the most affected, as well as the entire fishing chain.

The MEP has described as "inadmissible" that the decision is not debated and that it has been adopted "without using updated scientific criteria". She has also asked to "listen" to the sector.

"We are scandalized by this decision," stressed the nationalist MEP, while recalling that a text was unanimously approved in the Galician Parliament against the decision of the European Commission and requesting that it rectify and annul the prohibition of bottom fishing.

‹ ›
Keywords:
BruselasComisión EuropeaBNGParlamento EuropeoPesca
Your comment has been forwarded to the administrator for approval.×
Warning! Will constitute a criminal offense, illegal, threatening, offensive, insulting and swearing, derogatory, defamatory, vulgar, pornographic, indecent, personality rights, damaging or similar nature in the nature of all kinds of financial content, legal, criminal and administrative responsibility for the content of the sender member / members are belong.
Related News