Biden says that Moscow has "blatantly" violated the UN Charter and describes nuclear threats against Europe as "irresponsible". 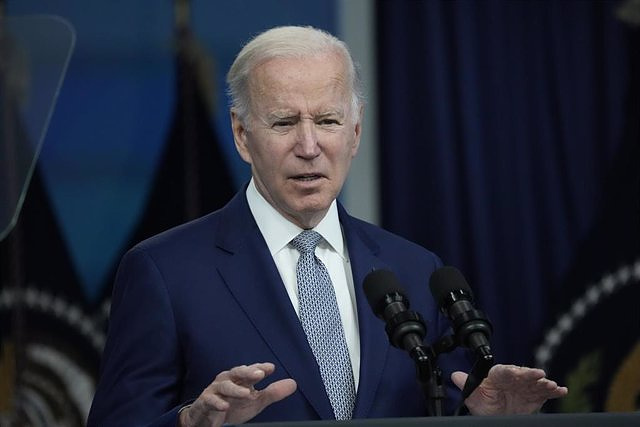 The United States announces 2.93 billion euros to address food insecurity caused by the conflict in Ukraine

The president of the United States, Joe Biden, has called on the international community to act united after Moscow has made "nuclear threats against Europe" and has ruled that a nuclear war "should never" be waged.

"We are not passive witnesses of history. We are the authors of history," Biden said during the 77th session of the United Nations General Assembly, urging the international community to work "together" to fight for the future and for the humanity. "A nuclear war cannot be won and should never be fought," she stressed.

During his speech, Biden stressed that Russia has not only made "nuclear threats against Europe" --which he has described as "irresponsible", as well as a "reckless disregard" of the Non-Proliferation Treaty--, but now also "is calling more soldiers to join the fight.

"The Kremlin is organizing a fake referendum to try to annex parts of Ukraine, an extremely significant violation of the United Nations Charter," he said, adding that "Russia has blatantly violated" its fundamental principles.

For this reason, he explained that "we must act clearly and decisively" in the face of the invasion of a permanent member of the United Nations Security Council against its neighbor, Ukraine. "He tried to wipe a sovereign state off the map," she has said.

"This war is about extinguishing Ukraine's right to exist as a state, plain and simple, and its right to exist as a people," he said, pointing out that "Ukraine has the same rights that belong to any sovereign nation." "No one has threatened Russia," she has sentenced.

Due to the war in Ukraine, the US president has been in favor of increasing the number of permanent and non-permanent representatives of the United Nations Security Council. "This includes permanent seats for those nations that we have supported for a long time: permanent seats for countries in Africa, Latin America and the Caribbean," he explained.

In this sense, the US president has indicated that "the time has come" for this United Nations institution "to become more inclusive" with the aim of responding "better" to the needs demanded by all states.

As part of his speech, Biden announced that the United States will allocate 2.9 billion dollars (2.93 billion euros) to address food insecurity caused by the conflict in Ukraine, the coronavirus pandemic and problems in the supply chain throughout the world.

"Our sanctions explicitly allow Russia to export fertilizers without any limits," he said, adding that "it is Russia's war" that has aggravated the food crisis in the world.

For this reason, he has accused Russia of "telling lies" and blaming the food crisis on "sanctions imposed by many" in retaliation for Russian aggression against Ukraine, a situation that has caused nearly 193 million people throughout the world are experiencing acute food insecurity.

In this way, he has referred to the protection agreement signed last month in Istanbul between Ukraine, Russia, Turkey, and the United Nations for the export of Ukrainian grain and the efforts of the states to ensure shipments to needy areas, particularly in Africa. .

Given the recent tensions with China, Biden has stressed that the United States "is going to behave like a sensible leader", so they do not intend to ask any nation to choose between themselves or other states, nor do they seek a Cold War.

"But the United States will not be ashamed and will promote our vision of a free, open, secure and prosperous world," he stressed, reiterating that Washington opposes "unilateral changes" in the 'status quo' with respect to Taiwan.

"We support the peace process carried out by the African Union in Ethiopia, to restore the security of all its people," Biden added, also referring to Washington's support for "free" elections in Venezuela or violence in Haiti.

Likewise, Biden has recalled that there is "a lot to do", focusing on the situation in Yemen, while he has dedicated a few words to the challenges facing Afghanistan, especially due to the ban on girls going to schools.

On the other hand, the US president explained to the member states that they will continue working to provide Israel with "security and prosperity" while continuing to promote dialogue to make the two-state solution a reality.

Finally, Biden ended his speech by assuring that the Non-Proliferation Treaty "is one of the greatest successes of this institution." "We cannot allow the world to go backwards now," she told the UN General Assembly.