Betis wins the European duel, Getafe gets even and Athletic likes it against Elche 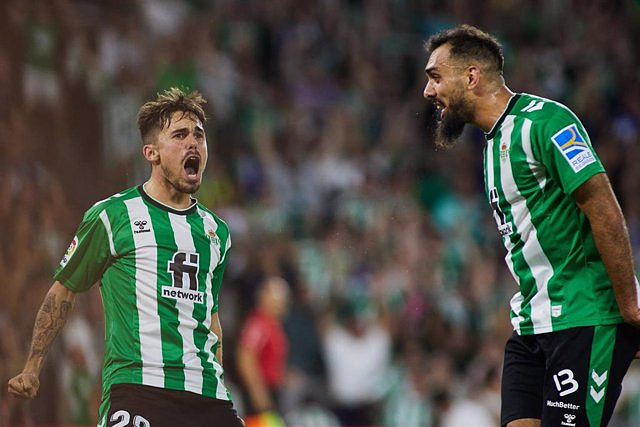 Real Betis won (1-0) the duel for the Champions League places against Villarreal in a hard-fought game with a goal from Rodri, while Getafe took it out on Real Sociedad at home to get their first win (2 -1) of the course and reduce their anxiety and Athletic thrashed and liked Elche, who still have not won in LaLiga Santander.

Sunday's day closed with Betis-Villarreal, a duel of candidates for Champions League positions this season, a game that ended up being won by the Sevillian team, who knew how to suffer in the final minutes and were more effective, defending until the last instantly the 1-0 that Rodri converted.

Luiz Henrique had the first for the locals when the first five minutes had not been reached, but Rulli was very attentive to save his shot. Betis came out on top and after an error in the Castellón team's exit, Canales stood up front and shot decisively, but the ball went up, to the relief of the Argentine goalkeeper.

Villarreal's response came in minute 12, when Gerard Moreno was able to stretch to finish off something forced, now without a goalkeeper, but with three Verdiblancos footballers acting as goalkeepers who repelled the attempt. And shortly after, in the 22nd minute, Gerard Moreno picked up a loose ball with Betis upside down, to start a quick transition serving a forward ball to Jackson. The striker assisted Lo Celso, only against Rui Silva, who narrowed it down perfectly to deny the Argentine's goal.

Villarreal continued to grow in the game, with a little more ease to generate danger near the green and white area, although without success. For its part, Betis continued to be somewhat stuck when it came to giving the last pass and testing Rulli. So the 0-0 reigned until the break at Villamarín. Emery gave entry to Baena and Chukwueze, but found no reward.

If Betis did, that in the 61st minute, when they needed it most, they made it 1-0 after a shot by Rodri to the center with a thread to the far post by Luiz Henrique. The goal encouraged Betis, who two minutes later enjoyed a very clear opportunity to sentence and make it 2-0, but Rulli's foot prevented the goal. Villarreal, very committed, tried until the end, but Betis defended tooth and nail a result that places them third in the table with 12 points, while the people from Castellón are fourth with 10.

Ernesto Valverde's team managed to recover the path of victory at the Martínez Valero, having a feast at the expense of Elche, to also prolong their great dynamic away from San Mamés. The 'lions' remain unbeatable away from home with two wins and the victory against the people of Elche places them fifth in the table.

Athletic was owner and master of the match practically from the initial whistle, and Elche collaborated in the good start of the Basques, with an own goal by Nico Mercau in the ninth minute. A jug of cold water for the people of Elche, who barely had time to recover from the first blow when Athletic converted the 0-2, just five minutes later, with an innocent penalty from Enzo Roco that Sancet scored.

The Basque team did not lower the piston and kept pressing, with the aim of sentencing the duel before the break. And he found his prize in the form of 0-3, with a great goal from Nico Williams, who opened his scoring locker in the top flight, beating Edgar Badía with a whiplash after tunneling Pedro Bigas. After that, it was the oldest of the Williams who could make the fourth, but finished off very weakly. And it is that the fourth goal was reserved for Alex Berenguer, finishing bringing out the colors of the Elche defense, with a desperate Francisco on the wing.

The local team came out with a different face after the break, much more combative and with more prominence in attack, thanks to some more participatory Pere Milla and Eze Ponce. In fact, it was the Argentine who scored the goal of honor (1-4) after a mistake by Vivian. Earlier, Athletic was able to round off their afternoon with a little hand with a great counterattack commanded by Iñaki Williams and Berenguer, but the latter's powerful left-footed shot crashed into the crossbar. This defeat leaves Elche very touched, which is penultimate with only one point.

Getafe beat Real Sociedad (2-1), in the first 'azulona' victory of the course, after a hard-fought duel by the people of Madrid, buoyed by the great performance of Turkish striker Enes Ünal, scorer of the first goal with a shot accurate free kick and assistant in the second goal. Brais Méndez scored the goal for the Basques, who believed in a draw until the end of the match.

Quique Sánchez Flores's team started much more concentrated and somewhat enraged, after the rout suffered the previous day in Mestalla. And in 14' the reward came for that first arreón, when Álex Remiro did not catch well a ball that would end in a penalty for Getafe, committed by Pacheco on Mayoral. He took the ball determined, but his conviction was not enough and the blue and white goalkeeper redeemed himself from his mistake by catching the naive shot of the former Real Madrid player.

This dangerous warning woke Real Sociedad up from lethargy, and they connected with two good attacking plays from the right, with debutant Álex Sola starring in a great shot with his left leg that David Soria stopped thanks to a great stretch. But when the Basque team was at its best, Umar Sadiq was injured when he made a bad support, so Mohamed Cho had to substitute him in the 38th minute.

When it seemed that the break would come with the initial 0-0, the referee signaled a dangerous foul in front of the Basque area. Ünal, determined, took a run and exquisitely hit the ball, which made a beautiful parabola to sneak directly through the top corner, making Remiro's stretch useless. The goal gave a break to Getafe's anxiety to win, who saw their first three points closer.

Given this, Sheriff brought in after the break Brais and Silva, to try to give a blow. But nothing could be further from reality, because Getafe made it 2-0 in minute 48, with a goal from Aleñá from a pass from Ünal, the hero of the 'azulona' victory. From then on, a Basque monograph that allowed them to close the gap with a header from the Galician midfielder to Cho's center, but their efforts to equalize were in vain, because Getafe did not want to miss their first victory to place 18th with four points, while the Real eleventh with seven.

‹ ›
Keywords:
Champions LeagueElcheReal SociedadBetis
Your comment has been forwarded to the administrator for approval.×
Warning! Will constitute a criminal offense, illegal, threatening, offensive, insulting and swearing, derogatory, defamatory, vulgar, pornographic, indecent, personality rights, damaging or similar nature in the nature of all kinds of financial content, legal, criminal and administrative responsibility for the content of the sender member / members are belong.
Related News