Betis and Villarreal play the 'Champions' in Villamarín

La Real clings to the 'high' of Old Trafford against the sunken Getafe and Elche looks for its first win against Athletic. 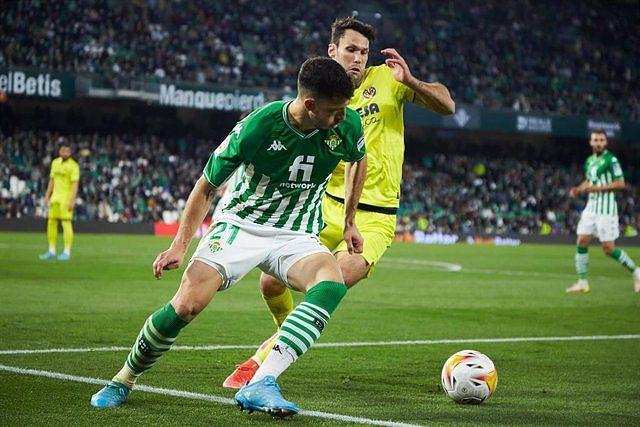 Real Betis and Villarreal put their 'Champions' places into play this Sunday at the Benito Villamarín (9:00 p.m.), on a fifth day in which Athletic Club will try to defend the last of the European places at Elche's home (4:15 p.m. ) and in which Real Sociedad, exultant after giving the bell at Old Trafford, want to confirm their recovery against a sunken Getafe (6:30 p.m.).

The team from Castellón, which started the day in third place, aspires to continue being one of the only three undefeated teams at the start of the domestic championship together with the leader Real Madrid (12) and FC Barcelona, ​​which has the same 10 points. In addition, it is the only team that has not yet conceded a goal.

On the other hand, in his debut in the Conference League he lowered his defensive performance and was about to be surprised by the Polish Lech Poznan, and only a goal from Francis Coquelin in added time avoided a major upset (4-3). Without Juan Foyth or Alberto Moreno, Unai Emery is keeping an eye on the state of Arnaut Danjuma, Pepe Reina and Manu Trigueros and hopes to recover Raúl Albiol, who missed the duel against the Poles due to a feverish process.

Betis, fourth with one point less than the 'Yellow Submarine', arrives enhanced by the Europa League victory against HJK in Helsinki (0-2), which has allowed them to partially forget last Saturday's defeat at the Santiago Bernabéu (2-1), which ended a streak of three consecutive league wins.

The absence of Nabil Fekir due to a muscle injury will disrupt the plans of Manuel Pellegrini in the coming weeks, who also lost Juanmi Jiménez and Víctor Ruiz in the clash on Finnish soil, both with ankle injuries.

At the Martínez Valero, Athletic Club (7) hopes to leave behind the setback against Espanyol (0-1), a defeat that put an end to a streak of three games in a row scoring points and which made Unai Simón pick up the ball for the first time from the bottom of the meshes.

Opposite, Elche (1) still do not know the victory this course, where they have only scored points against Almería (1-1) and have lost in their commitments against Betis (3-0), Real Sociedad (0-1) and Villarreal (4-0). The situation forces Francisco to make important decisions that could go through modifying the scheme and the eleven.

The coach of the 'lions', Ernesto Valverde, will have to deal with the possible losses of Yuri Berchiche, Mikel Balenziaga and Ander Herrera, but in return he will recover Mikel Vesga. The people of Elche, meanwhile, have the confirmed absence of Gonzalo Verdú, although they will once again be able to count on Pol Lirola, Fidel Chaves and Edgar Badía.

Lastly, Real Sociedad (7) will try to take advantage of the emotional surge that their victory against Manchester United in the Europa League (0-1) has brought about against Getafe. A penalty goal by Brais Méndez served to assault the 'Teatro de los Sueños', and now they hope to transfer their good moment to the domestic championship.

The irregularity of the first dates, with two victories and one defeat, was confirmed with a draw on the last day against Atlético (1-1). Now, Imanol Alguacil will have to rotate a team with the losses of Mikel Oyarzabal, Martín Merquelanz and Carlos Fernández and the more than probable absences of Diego Rico and Robin Le Normand.

There is more concern among Quique Sánchez Flores' team, penultimate in the table with only one point and with the questionable honor of being the team with the most goals in the championship (11). After being thrashed by Atlético (0-3) and Girona (3-1), they stopped the bleeding against Villarreal (0-0), but returned to the bad path against Valencia (5-1). Mauro Arambarri, due to suspension, and Luis Milla, Omar Alderete and Dakonam Djené, due to injury, will miss the match.

‹ ›
Keywords:
Champions LeagueElcheReal SociedadBetis
Your comment has been forwarded to the administrator for approval.×
Warning! Will constitute a criminal offense, illegal, threatening, offensive, insulting and swearing, derogatory, defamatory, vulgar, pornographic, indecent, personality rights, damaging or similar nature in the nature of all kinds of financial content, legal, criminal and administrative responsibility for the content of the sender member / members are belong.
Related News