He warns that focusing on talking about quotas and internal life is a mistake because it wears them out and distances them from citizenship. 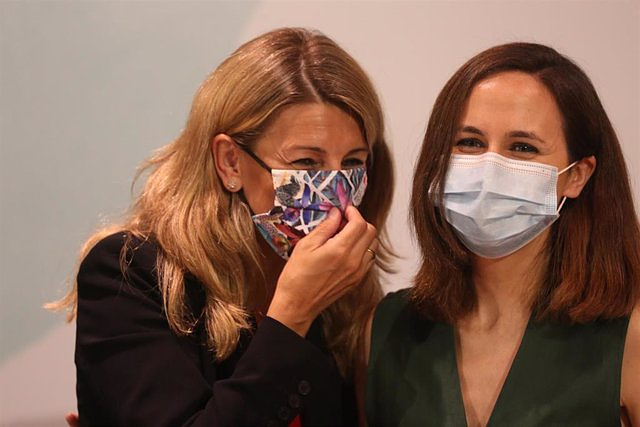 The leader of Podemos and Minister of Social Rights, Ione Belarra, has assured that Podemos maintains the same strategy since its inception and focused on building the formation of strong and broad candidacies for the next electoral cycle. And in this sense and with a view to the general elections, she considers the 'Sumar' platform promoted by the second vice president, Yolanda Díaz, as "the main electoral ally".

He has also underlined, as they have proclaimed on many occasions, that Díaz is the best possible candidate and the one in charge of leading that progressive space, while he has now refused to enter quotas and list positions since they would be wrong if they start talking of the "internal life" of organizations, as it is what "wears them out" and "distances" them from citizenship.

"It is important that we guarantee what I am guaranteeing, that we are going to build united candidacies and as strong as possible in all the territories, also in the general ones, and there Yolanda Díaz's project is an electoral ally, and that Podemos is going to present in the best possible conditions to obtain the best results and promote the strongest changes", he has broken down in statements to RNE, collected by Europa Press.

However, Belarra has admitted to being a little "surprised" by the repercussion of her position of joining forces with Sumar in the face of the next general elections, since what she said is "absolutely obvious".

"The 2023 electoral cycle is fundamental for the country, also for the autonomous communities and city councils, because it is going to be the consolidation cycle of change, of many progressive policies and they are enormously important elections (*) in which Podemos has been preparing for a long time to arrive in the best possible conditions (*) Podemos does what we have done in all territories and on all occasions. Podemos is going to work so that in each place we have the strongest possible, most transformative and broadest candidacies" he has reviewed Belarra.

In this regard, he added that Podemos has always sought in all electoral appointments lists that include representatives of civil society and also made up of agreements with "sister" political forces.

In the case of the next general elections, Belarra has emphasized that 'Sumar' is a "key electoral ally" to be the majority force if it is possible to re-edit the current coalition Executive.

Questioned about whether the formation of this broad front can lead to noise due to the formation of the lists, as in Andalusia, the general secretary of Podemos has predicted that they will be able to do a "good job" in order to reconfigure the alternative space to the PSOE .

Moreover, he has warned that they would be wrong if they start concentrating next year "on talking about ourselves", because citizens need and are concerned about having General Budgets and promoting reforms such as repealing the 'Gag Law' or definitively approving the new housing regulations.