Echenique asks the PSOE to commit to supporting effective restrictions on health privatization within the 'Darias Law'. 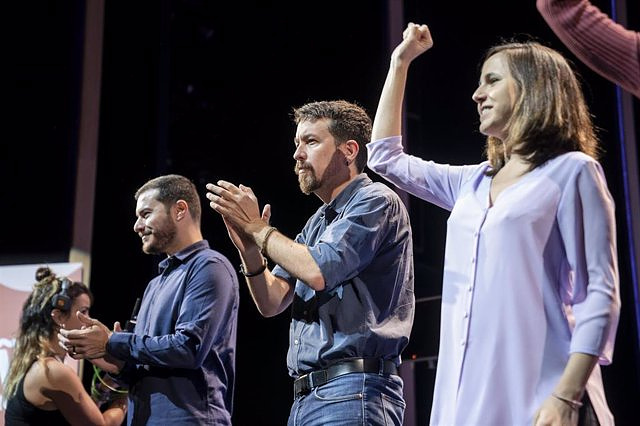 The leader of Podemos and Minister of Social Rights, Ione Belarra, and former Vice President Pablo Iglesias have participated in the demonstration in defense of public health in Madrid, together with the leaders of the formation at the regional level.

In social networks, Belarra has expressed her pride in participating in this great mobilization to defend "what is public", both citizens and professionals, who say "enough is enough to dismantle Primary Care" by the PP in the Community of Madrid.

"Enough of giving money to the rich and taking it away from public health, taking it away from people and professionals who save people's lives", he assured to denounce that the PP has a "plan against the public" and that this is, precisely, his "star" strategy in Madrid, "disregarding" also the health personnel.

Therefore, he has promised that it is necessary to "throw out" the PP from the Madrid institutions and, in this line, he has highlighted that Podemos is already working towards that objective being met in the next regional elections in May.

Meanwhile, Iglesias has shared a snapshot on Twitter with Belarra and the party's candidates for the Madrid Community and City Council, Alejandra Jacinto and Roberto Sotomayor respectively, along with the message "public health".

In turn, Jacinto has defended that this broad demonstration implies the beginning of "change" in the Community of Madrid by assuming a "motion of citizen censure" to the health policies of the regional president, Isabel Díaz Ayuso.

The spokesman for United We Can in Congress, Pablo Echenique, has described this movement in defense of public health as relevant, of which the political forces have to "take note" and "act" in protecting the public service because "one does not It's not what he says, but what he does."

In this way, he has criticized that "neoliberal" governments like Ayuso's have a "very clear" goal, which is to "deliver healthcare to the private sector" to "turn it into a business."

Along these lines and in clear allusion to the PSOE, he pointed out that the Health Equity and Cohesion Law, known as the 'Darias' Law, leaves Law 15/1997 "intact" for now, which enables indirect management in health, promoted by the PP during the stage of José María Aznar.

A regulation that, in his opinion, opens "the wild privatization of public health in Spain, and for this reason they introduce amendments to the 'Darias Law' to establish an effective limit on the outsourcing of health services. "Any party that seriously defends public health and not just lip service should accompany us. We'll see if that happens," Echenique warned.

‹ ›
Keywords:
Pablo IglesiasPodemosPPIone Belarra
Your comment has been forwarded to the administrator for approval.×
Warning! Will constitute a criminal offense, illegal, threatening, offensive, insulting and swearing, derogatory, defamatory, vulgar, pornographic, indecent, personality rights, damaging or similar nature in the nature of all kinds of financial content, legal, criminal and administrative responsibility for the content of the sender member / members are belong.
Related News