Belarra and Montero mobilize Podemos for the May elections, which calls for "fair" agreements from the IU and other parties

The purple party claims that it arrives "with its homework done" months after this electoral appointment. 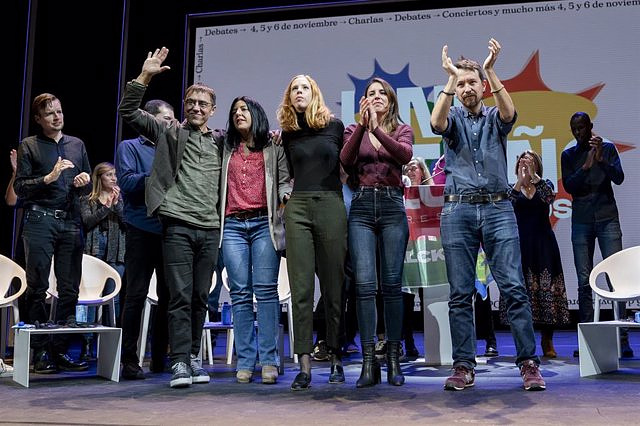 Podemos faces the pre-campaign of the regional and municipal elections with an intense tour throughout the territory, where the ministers Ione Belarra and Irene Montero will participate, and demands "fair" coalition agreements with the IU, in the first place, and the rest of the forces of left that aspire to broader candidacies.

And it is that from the two main organizations of Unidas Podemos they set a deadline to have the map of confluences clear at the beginning of 2023.

Specifically, the IU sets the end of January as the deadline to agree on electoral coalitions, which exceptionally will be longer in those territories where it is part of the Government. Meanwhile, Podemos views this time horizon well and is even in favor of accelerating it in regions where possible.

The purple formation already has an extensive calendar outlined for its tour 'The force that transforms', with which it will tour all the regions to promote its candidates and vindicate their achievements in the Coalition Executive, according to sources from this organization.

In total, there will be 19 acts distributed among the 17 autonomous communities and with the participation of more than 12 positions from the party's state leadership, among which the presence of the party leader, Ione Belarra, and the head of Equality, Irene stand out. Huntsman.

In addition, as detailed from Podemos, several of these events will be thematic and will deal with issues that the political space champions. Thus, one has already been scheduled that will deal with Basic Income (on December 17 in Madrid) and another on feminism (in Navarra with the specific date yet to be defined).

Also in the pre-campaign period it will celebrate 'milestones' of the formation. Along these lines, it has already celebrated the 'Uni de otoño', the ideological forum to rearm the party, and the anniversary of the birth of Podemos or its 'Spring Festival' lies ahead.

Therefore, from Podemos they explain that they have a "clear road map" until the May elections and that the party is "coordinated" at all levels. In this way and with the internal primaries completed, the party has more than 600 candidates ready, a figure that they expect to increase in the months prior to the elections.

The leadership of Podemos has marked the municipal elections as a priority and claims that it has already "done its homework", with the organization ready, waiting for other left-wing parties to finish their internal processes.

In the case of the IU, it is also beginning to prepare for the pre-campaign and this Saturday it will present its framework program for the municipal elections, with an act in Rivas where it will visualize its greatest local implementation in the mayoralties, where it has 200 councilors and 2,000 councilors. In addition, it is also in the middle of the internal primaries phase, although its calendar is more staggered.

The strategy to forge joint candidacies in the case of Podemos is clear, first forge agreements with the parties within the confederal space (IU and Alianza Verde) and then expand alliances with other progressive formations. The idea is thus to avoid the conflict that occurred with the 'For Andalusia' coalition, where the purples felt cornered by the consensus that IU forged with other formations outside space.

For the moment, the confluence of Podemos and IU is sealed in Navarra and in Catalonia, under the umbrella of the commons in the municipal ones. It is also advanced in La Rioja and no problems are expected in Extremadura and Cantabria, according to sources from the confederal space.

The biggest problems are faced in autonomies where both Podemos and IU are not the majority force to the left of the PSOE. Thus, in Madrid a unity candidacy with Más Madrid is practically ruled out, which this formation rejects, and it is assumed that there will be a joint candidacy of the two main formations of the confederal space. On the other hand, there is still hope that this possibility of union will be forged with Compromís in Valencia.

The case of the Canary Islands is also unique where there is already a party table deployed where the space for the regional ones. Depending on its result, it will be seen how the relationship with the Drago project headed by the former deputy of United We Can Alberto Rodríguez is established.

Meanwhile, an attempt is being made to explore the possibilities of confluence in the territories where Podemos and IU have competed alone to date, as is the case of Murcia, Aragón and Asturias, although in the latter two there are difficulties.

There is also the conviction that there will be no joint primaries and that Podemos and IU will seek political agreements to shape their coalitions. At this point, Garzón's formation emphasizes its better presence in the municipalities while Podemos defends that it has a greater militant base together with greater knowledge in society at the regional level.

The question of the brand to attend the elections is also outlined and mixed formulas will be chosen. Thus, the name Unidas Podemos will continue to be used in those communities where that name is established and works. Meanwhile, in the case where there is no previous experience, the preferred option of both parties is to resort to an aggregation of their acronyms.

‹ ›
Keywords:
IUPodemosIrene MonteroIone Belarra
Your comment has been forwarded to the administrator for approval.×
Warning! Will constitute a criminal offense, illegal, threatening, offensive, insulting and swearing, derogatory, defamatory, vulgar, pornographic, indecent, personality rights, damaging or similar nature in the nature of all kinds of financial content, legal, criminal and administrative responsibility for the content of the sender member / members are belong.
Related News