The minister says that the popular have the "gold medal in constitutional disobedience" with their blockade of the CGPJ. 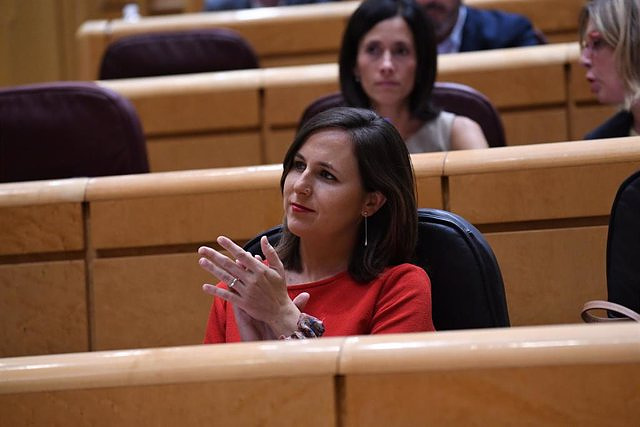 The Minister of Social Rights, Ione Belarra, has accused the PP in the Senate of obtaining the "gold medal in constitutional disobedience" during this legislature for its "kidnapping" of the renewal of the General Council of the Judiciary (CGPJ) for almost four years, to accuse this formation of being "the same corrupt cartel as when they were kicked out of the Government" through the 2018 motion of censure.

For his part, the popular senator Jaime de los Santos has replied that in order to speak of "criminals" and "democratic deficiencies" there is Podemos, with the condemnation of the state co-spokesperson of the Isa Serra party and the Supreme Court ruling against Alberto Rodríguez, both disabled for "serious altercations" with police officers.

Both have engaged in a harsh debate during the control session in the Upper House, in an interpellation directed by the PP to the head of Social Rights about the management of his department.

At one point in his speech, Belarra censured the popular blockade of the renewal of the governing body of the judges, with the "sole objective" of "controlling justice from behind."

What's more, he has criticized that the PP has broken a "record in irresponsibility", positioning itself against the energy saving measures proposed by the Executive, "giving wings" to the strategy of Russian President Vladimir Putin and trying to put Spain in a "tight international".

"I see little patriotism in that bench with a record, also, in inconsistencies calling the top of the gas promoted by the Government an 'Iberian scam'. Now that they are going to imitate us in Europe, what are they going to say? Record also in antisocial voting", has launched Belarra to the PP to advise them to recognize that they have adopted a "major political error" to recover "some kind of credibility" after being "ridiculous".

The mentions of Belarra have had a reply in De lo Santos, to censor the minister who comes to the chamber to give a rally plagued by "one falsehood after another" about the PP, together with "unforgivable injustices" through her management with "those They're really having a hard time."

He has also reprimanded the minister that Serra and Rodríguez are from his party and that when talking about "cartels" he can refer to cases and investigations that affect Podemos, citing the case of the investigation for alleged money laundering against the co-founder of the formation Juan Carlos Monedero, opened by the magistrate of the National High Court Manuel García Castellón.

At the end of the interpellation, the PP senator demanded that the Presidency of the Senate remove Belarra's "barbarity" from the agenda of comparing a "democratic party" like the PP with a cartel, since the meaning of this term fixed by the Royal Spanish Academy refers to "traffickers".

‹ ›
Keywords:
SenadoPodemosPPSecuestroCorrupciónMoción De CensuraCGPJIone Belarra
Your comment has been forwarded to the administrator for approval.×
Warning! Will constitute a criminal offense, illegal, threatening, offensive, insulting and swearing, derogatory, defamatory, vulgar, pornographic, indecent, personality rights, damaging or similar nature in the nature of all kinds of financial content, legal, criminal and administrative responsibility for the content of the sender member / members are belong.
Related News