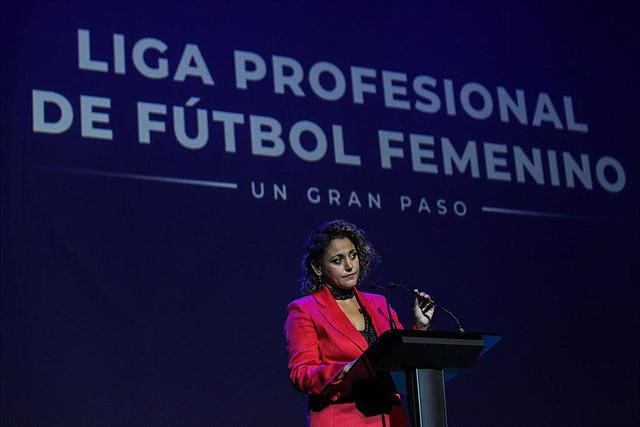 The president of the Professional Women's Soccer League (LPFF), Beatriz Álvarez Mesa, explained this Tuesday that the competition has "reached the end, but at the same time also the starting point" on the weekend in which the first women's professional competition in Spain, that no one is going to "stop" anymore, making it clear that they cannot "lose this opportunity" that has been presented to them.

"Today it can be said that it is a little bit the starting point, we have reached the end, but at the same time also the starting point, where now we are already unstoppable, nothing is going to stop us and we are in a very sweet moment that we have to Enjoy. Today we have to enjoy and that all women's football enjoy", Álvarez declared before the presentation ceremony of the LPFF.

Beatriz Álvarez, who has "her whole life linked to women's football", expressed that, although the LPFF "was recently formed in June", it has been "working against the clock for three months to be able to reach the first league match in the better conditions".

"I am happy and proud to have achieved it. We have achieved the strategic points that we set for ourselves from the beginning and we can say that the league starts with all the guarantees, all possible sustainability and stability for the clubs and that we are in a new era", he claimed.

Now, the next big step they have to take will be "the monetization of the competition" and "the commercialization of both the commercial assets and the television stations". "More than a step is a big step. Women's football has always taken much smaller steps, it was created from the roof, we had to start working at the base and now we are at that point that we all wanted to be professional and from From now on, it remains to work on the monetization and marketing of the competition itself", he commented.

For Beatriz Álvarez Mesa, now the advance will be unstoppable. "I think that with all the barriers that we women have had to overcome, especially in a world as masculinized as football, it is that now we have been given all the tools and all the resources and we have the best engine and gasoline to start and take off. We cannot miss this opportunity and everything we achieve from now on will be for the better," he said.

Álvarez Mesa also joked about being the 'Javier Tebas of women's football', something that "even people close to him" have told him. "In the end it's the counterpart, it's a bit of a similarity, but actually yes, I'm the president of the LPFF and I hope to defend the clubs as they deserve, the players and all the levels that make up women's football", concluded.