Bayer announces a new investment of 4 million for the Asturias plant, which it considers "strategic" 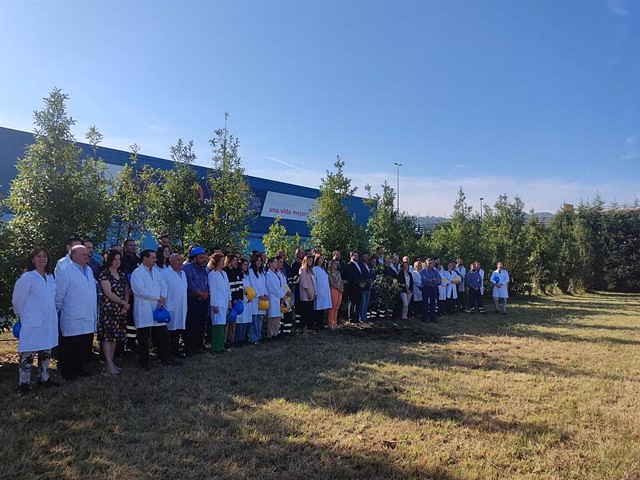 The Bayer plant in La Felguera (Asturias) celebrates its 80th anniversary and has done so by announcing an investment of 4 million euros for this year that seeks further development of digitization and increased efficiency and production flexibility of the plant. Bayer managers have stressed that La Felguera "is a strategic plant that is well prepared and positioned."

During the institutional event held this Monday, the Managing Director of Bayer in Spain and Portugal, Bernardo Kanahuati, indicated that the La Felguera plant is a world reference plant, participating in large-scale strategic projects. He recalled that 27 million euros have been invested in the last 5 years, to which must now be added those four million euros for this year.

He has influenced the company's commitment to sustainability and has congratulated the workers of the plant for their good work, achieving the same world reference for the company. "Hopefully it will be 80 more years," she has said.

For his part, the director of the plant, Jorge Julián Álvarez, has indicated that this plant is "very well prepared and positioned and is a strategic plant." For this reason, he has stated that he must focus on continuing with the improvement of processes; it must be prepared for the possibility of growth and must develop its commitment to sustainable development. "In the last 5 years, La Felguera has been able to reduce CO2 emissions by 44% despite the fact that its production has increased", he has indicated.

He added that at this point it is inevitable "to look at the past, from the birth and very origin of this factory in 1942, where acetylsalicylic acid was already present". Since that date, it has been reviewing the main milestones of the plant until reaching the present.

He recalled that since 2014 La Felguera is the plant that houses the world production of this active ingredient. "With all the active ingredient that has been manufactured here in these eight years, if those tablets were lined up around the equator we would go around the world 200 times, and what is most impressive is the millions of people who have benefited from this production".

For his part, Adrián Barbón took advantage of this event to reflect on what he believes should be a priority for Asturias, such as "achieving a clean, green and sustainable economic landscape". In this sense, he has indicated that Asturias "has lost his fear of transformation."

Thus, he considered that this plant is a good example of this change, also highlighting that the company "has not stopped investing to adapt to the demands of each time". "Bayer has already disbursed 27 million euros in the last five years and today it announces four more, so as president of the Principality I want to thank it," said Barbón.

The Asturian president has also highlighted the company's environmental commitment and has stressed that Bayer meshes perfectly with this "economic, clean, competitive and sustainable landscape".

The deputy mayor of Langreo, Luis Javier Castro, also spoke, stressing the importance of the Bayer plant for the area and for Asturias in general. "Nothing could make us happier than Bayer's plans in Langreo coming together. What we all want is for it to continue here for many years, it's already 80 years of life together and large investments by the brand in Langreo", he indicated.

The La Felguera plant currently has a staff of 100 people, which reaches 150 if the staff of external companies is added. Asked the director of the plant about the impact of inflation on the production process, he has indicated that it is limited because the energy costs, although they do affect, it is not a plant of great consumption like other industries.

Before the interventions, an act was held to plant the 80th tree, one for each year of the plant's life, which tries to recognize the work of all past people and the current staff.

‹ ›
Keywords:
Bayer
Your comment has been forwarded to the administrator for approval.×
Warning! Will constitute a criminal offense, illegal, threatening, offensive, insulting and swearing, derogatory, defamatory, vulgar, pornographic, indecent, personality rights, damaging or similar nature in the nature of all kinds of financial content, legal, criminal and administrative responsibility for the content of the sender member / members are belong.
Related News