Batet opens the doors of Congress to citizens: "Welcome home"

He hopes that their lordships will be infected with the "respect, enthusiasm and desire to learn" of the visitors. 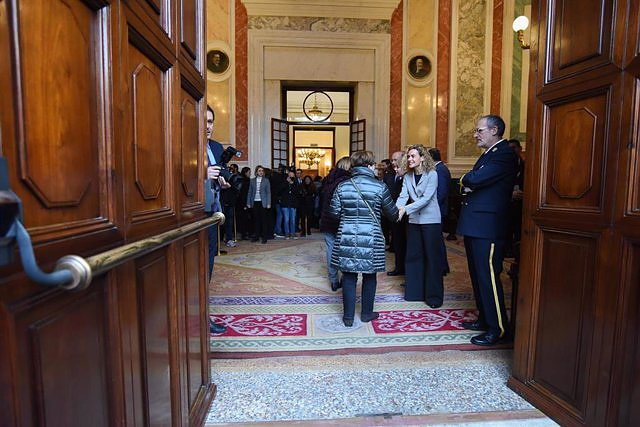 He hopes that their lordships will be infected with the "respect, enthusiasm and desire to learn" of the visitors

The president of Congress, the socialist Meritxell Batet, accompanied by several members of the Board and representatives of political parties, received this Friday the first citizens who have come to meet the Lower House in the framework of the twenty-fifth edition of the Conference on Open doors. "Welcome to her house", she said when opening the Puerta de los Leones with great punctuality, at 09:28.

Mario, a young student who got up at 6:30 a.m. to go to Carrera de San Jerónimo, was the first citizen to cross the famous bronze door, which is only opened for citizens to enter or in solemn sessions presided over by the King, as the opening sessions of the Cortes Generales of each Legislature.

After him, two other high school students have gone to the seat of the legislative power, who will not go to class today and, after the visit, plan to have breakfast. Citizens will enter in groups of 40 people, plus another ten without an appointment, every 15 minutes this Friday and Saturday, visits that take place on the eve of the 44th birthday of the 1978 Constitution and that were inaugurated in 1997, under the mandate of the then president of the institution, the 'popular' Federico Trillo.

Upon entering, the citizens, many of them young, have greeted the representatives who have come to receive them. In addition to Batet, there were the third vice president of the Congress Table, Gloria Elizo; the general secretary of the PP, Cuca Gamarra; Vox spokesman in Congress, Iván Espinosa de los Monteros; and the general secretary of the Socialist Group in the Lower House, Isaura Leal, among others.

The greetings have been warm, in a good atmosphere and with laughter. The representatives, for their part, have been interested in the waiting time of the citizens and if they have been cold before entering. This year, unlike the previous ones, visitors will not be able to enjoy a chocolate or a broth.

Batet, who has declared herself "excited", has transferred to the media that the phrases she has exchanged with the citizens, "short", have basically been "encouragement and congratulations". However, some of them have also called for "climate control" in the chamber and "less tension", after the escalation of the harsh tone in recent days. Others, "very generous" according to the president of Congress, have also called her "pretty".

Along these lines, and with the respectful spirit, enthusiasm and illusion of the citizens who visit Congress these days as a backdrop, Batet has asked to reflect on respect for others.

"That respect, curiosity and desire to learn, listen and speak has to be something that infects all of us (the members of the Lower House), treating each other with respect and curiosity to meet those who think differently", he pointed out, emphasizing that the Open Days have an "important symbolism".

This year the visitors, who can see the Congress between 09:00 and 19:00, will be able to see the recently restored façade of the Palace. On the portico supported by six Corinthian-style columns, visitors will enjoy one of the largest sculptural ensembles of the Spanish 19th century: the frontispiece of the Palace, made up of classical-style figures that idealize Strength, Justice, Courage and Science, among other concepts.

Citizens have begun their tour of the Isabel II Lobby, where they have contemplated a copy of the Constitution of 1812, prepared by the Cortes of Cádiz, and guarded by the Carrara marble statue, the work of Josep Piquer i Duart, of the monarch who inaugurated, in 1850, the Palacio de las Cortes.

In the Salón de Pasos Perdidos, visitors have seen the vault with four allegories, the work of Vicente Camarón, and the medallions that represent the most important politicians of the 19th century, and then they go to the chamber where, in addition to chatting with the deputies who move to the place, they can sit in the seats of their favorites.

They also have time to observe the decoration of the vault, the fan skylight that lets in natural light, the two large paintings located on both sides of the Presidency, 'The oath of the Cortes of Cádiz', and 'María de Molina presenting to his son before the Courts of Valladolid', the caryatids and the great effigies of the Catholic Monarchs.

Already on the first floor of the Palace, visitors enter the Mariana Pineda Room, where the Board of Spokespersons meets, to see the painting 'Mariana Pineda in Chapel', the work of Vera Calvo, and can tour the portrait gallery , a historical journey through the presidents of the Congress of Deputies painted by some of the most relevant artists of the 19th and 20th centuries.

To conclude the visit, citizens can go down to the new space set up in the basement of the Palace, which premiered at the 2021 Open Doors with an exhibition on Clara Campoamor for the 90th anniversary of the women's vote, and which from this month of December will host a permanent exhibition on "Democracy, Parliament and Constitution".

‹ ›
Keywords:
Congreso De Los DiputadosMeritxell Batet
Your comment has been forwarded to the administrator for approval.×
Warning! Will constitute a criminal offense, illegal, threatening, offensive, insulting and swearing, derogatory, defamatory, vulgar, pornographic, indecent, personality rights, damaging or similar nature in the nature of all kinds of financial content, legal, criminal and administrative responsibility for the content of the sender member / members are belong.
Related News