Page, Lambán, Barbón and Lobato support the judges and distance themselves from Irene Montero's accusations. 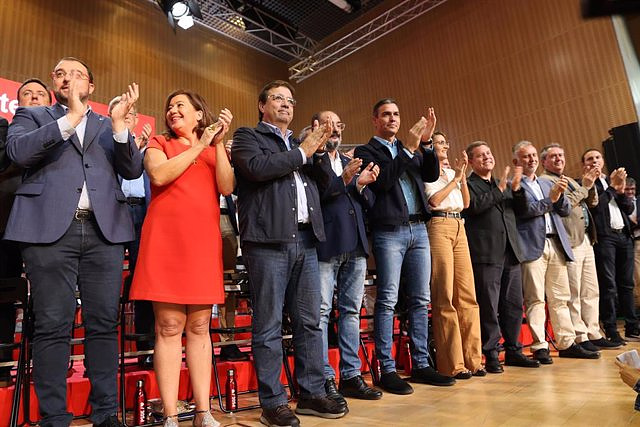 Page, Lambán, Barbón and Lobato support the judges and distance themselves from Irene Montero's accusations

Several presidents and regional leaders of the PSOE have conveyed this Thursday their wish that a solution to the Law of Comprehensive Guarantee of Sexual Freedom, known as the Law of the 'only yes is yes', be sought as soon as possible, after they have occurred several sentence reductions and releases of those convicted of sexual crimes by virtue of the application of the norm.

In this line, the socialist presidents of Aragón, Javier Lambán; Asturias, Adrián Barbón and Castilla La Mancha, Emiliano García Page, as well as the general secretary of the PSOE-M, Juan Lobato and the government of Extremadura, chaired by Guillermo Fernández Vara.

The aforementioned socialist charges have also positioned themselves in defense of the work of the judges and have therefore distanced themselves from the accusations made by the promoter of the norm, the Minister of Equality, Irene Montero, who held the judges responsible for the sentence reductions , for the interpretation they make of the law.

In this regard, Lambán urged this Thursday to seek "as soon as possible" solutions or "palliatives" to the "loopholes" of the 'only yes is yes' Law, which is having an effect contrary to the will of legislators.

In addition, he has indicated that if there have already been several judges who have made a certain interpretation of said law, "it almost certainly means that the law offers loopholes that give rise to this type of interpretation", he added, although he has pointed out that It is not who to say if the minister has to resign.

Along the same lines, the president of Asturias has stated that "this is not about blaming the judges, it is about seeking a solution to the problem."

Barbón has indicated that although it is necessary to facilitate greater training in gender perspective, the solution to the problem involves "immediately rectifying and correcting the unwanted effects of the application of the law." "You have to find a way out of this mess," she has sentenced.

In addition, he recalled that there is a separation of powers and has distanced himself from Montero's statements. "What cannot be done is that when there is an unwanted and unwanted application, the judges are attacked," she has indicated.

For his part, Emiliano García Page has maintained, regarding the minister, that he displays "intellectual arrogance" for not recognizing the error, and regrets that, in order to "reaffirm himself", he now opts for the option of "digging a trench". However, he does not think that he has to resign, although he believes that a rectification should be demanded of him "especially of what is the accusation of a whole body of the State --the judges--", he pointed out.

In this sense, the Minister of Equality of her government, Blanca Fernández, has indicated that it is not possible to agree that the 'yes is yes' law allows the reduction of sentences for some sexual offenders and rapists. "You have to reflect and react immediately so that it does not happen, because if any door has been left open, it must be closed immediately because the victims cannot be revictimized," she added.

Although he has admitted that the 'yes is yes' law is a good rule in general terms, he considers that "if the rule is wrong about this, what you have to do is correct it and stop us from political diatribes," he pointed out.

Juan Lobato has also shown his opinion, who has advocated "opening a reflection" on whether there are errors with the rule since he understands that if there has been a legislative change that can lead to "various interpretations" "nothing" happens to study whether it must be "adjusted" since the objective is to protect the victims and harshly punish those who have acted "disgustingly".

"If with this law there is any adjustment to be made so that this objective is met, I believe that in politics you have to be humble, analyze and if there is something to correct and improve that is improved", he has transferred. Thus, he has continued that he is always "in favor" of opening reflection processes and "correcting errors and improvements". "In politics, realizing that something is not working, the sooner and the more humility the better.

Finally, the Minister of Equality and Cooperation for Development, Isabel Gil Rosiña has admitted that "there is an issue that conflicts with the law and that the appropriate institutions have to deal with" while asking "that it be fixed".

However, he has maintained that the 'only yes is yes' law cannot be questioned despite the effects it is having, while he has underlined the progress of Spanish legislation in the fight against gender violence, an issue in which Spain is at the forefront of the world, as he has stated.

‹ ›
Keywords:
PSOE
Your comment has been forwarded to the administrator for approval.×
Warning! Will constitute a criminal offense, illegal, threatening, offensive, insulting and swearing, derogatory, defamatory, vulgar, pornographic, indecent, personality rights, damaging or similar nature in the nature of all kinds of financial content, legal, criminal and administrative responsibility for the content of the sender member / members are belong.
Related News