Barça, with Bayern, and Real Madrid, with Chelsea and PSG, in their Women's Champions groups 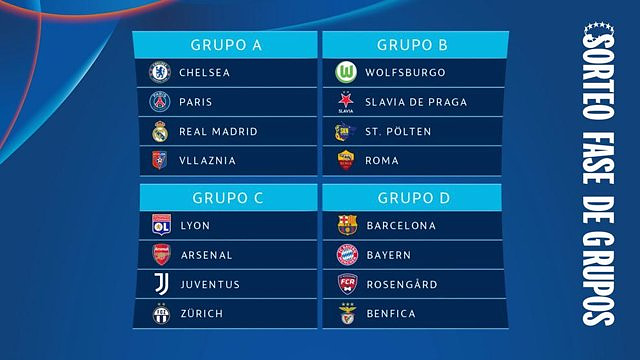 FC Barcelona, ​​current runner-up in the Women's Champions League, will face the German Bayern Munich, the Swedish Rosengard and the Portuguese Benfica in the group stage of the 'Champions' 2022-23, while Real Madrid will face the English Chelsea, French Paris Saint-Germain, and Albanian Vllaznia.

In a draw held at the UEFA headquarters in Nyon (Switzerland) and which included the former Dutch striker Manon Melis as the 'innocent hand', the Catalans were placed in Group D, where they will face Bayern, runner-up in the league German and that eliminated Real Sociedad in the previous phase -4-1, on aggregate-; Rosengard, who won the Swedish league; and Benfica, champion of Portugal.

For its part, the Whites, third in Spain and who knocked out Sturm Graz (6-0), Manchester City (1-0) and Rosenborg (5-1), will have as rivals in the Group A to Chelsea, champion of England and runner-up in Europe in 2021; PSG, French runner-up; and Vllaznia, winner of the Albanian league.

Olympique de Lyon, eight-time European champion and 'executioner' of the Catalans in the final last year, will meet in Group C with Arsenal, second in England; Juventus, champion of Italy, and Zurich, winner of the Swiss league. In Group B will be Wolfsburg, champion of the Bundesliga; Slavia Prague and St. Pölten, champions of the Czech Republic and Austria, and Roma, Italian runner-up.

Matches will be played between October 19 and December 22, with the top two teams from each group advancing to the quarterfinals. The final will be played for the first time in the Netherlands, at PSV's stadium in Eindhoven, on the weekend of June 3-4, 2023.

‹ ›
Keywords:
Real MadridChampions LeagueFútbol Club BarcelonaMujer Y Deporte
Your comment has been forwarded to the administrator for approval.×
Warning! Will constitute a criminal offense, illegal, threatening, offensive, insulting and swearing, derogatory, defamatory, vulgar, pornographic, indecent, personality rights, damaging or similar nature in the nature of all kinds of financial content, legal, criminal and administrative responsibility for the content of the sender member / members are belong.
Related News