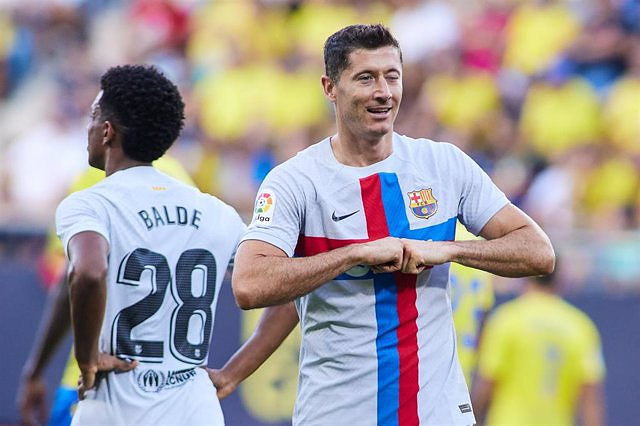 Xavi's men beat the Andalusian team 0-4, in a game with rotations in the Barça team and that needed their heavyweights to get unstuck

FC Barcelona won this Saturday with a landslide (0-4) against Cádiz at the Nuevo Mirandilla, in the match corresponding to matchday 5 of LaLiga Santander, a duel in which Xavi Hernández incorporated changes in the starting eleven without a prize in the first half, for which he needed his heavyweights to take the three points, in a hierarchical response against an Andalusian team that continues without winning or scoring.

The Catalan coach made his debut for Marcos Alonso, from the bench, and Héctor Bellerín, as a starter, in a team with fewer regulars and with his star, the Polish Robert Lewandowski, as a substitute. After a somewhat poor first half in terms of occasions, Barça woke up with the changes and grew in a match that began to get complicated without the arrival of the first goal. The match had to be stopped due to a health problem of a fan in the stands. Barça is the momentary leader with 13 points, while Cádiz is still bottom.

The match began with Cádiz more engaged and enjoying the first chance of the match in the second minute, when Alejo crossed from the right and, after a poor clearance by Araujo, Sobrino did not take advantage of the rebound to finish off without finding a prize.

Barça continued to adapt to the game and their first opportunity helped. Raphinha, very active throughout the match, tricked Ledesma from the edge of the box to shoot low at the short post, crashing the ball into the post. From there came the Barça monograph, which, however, did not stand out for its efficiency and precision. His superiority in the game was not reflected on the scoreboard, in a FC Barcelona that was beginning to show signs of desperation.

That superiority with the ball, practically always playing the first 20 minutes in the rival field, delayed the very advanced line with which Sergio González's team began the duel. Without Pedri in the center of the field due to Xavi's rotations in the Champions League week, Gavi became the owner of the midfield, appearing in all areas of the field, also improving De Jong's version, more active as an interior than as a pivot.

Barça's second unit did not show the same efficiency as the usual starting team, noticing too much the absence of Robert Lewandowski. There were no great chances until the end of the first half, when at 36' Depay was unable to make one of the clearest opportunities possible. The ball reached the Dutchman, completely alone, after a cross header from Araujo to the center of Bellerín, but the 0-1 did not finish arriving.

Just two minutes later, the Catalans requested a penalty on Balde, after he faced Alejo and fell to the grass in the area. However, Del Cerro Grande did not see anything punishable and they did not notify him from the VAR after reviewing the play. Thus, the break was goalless, without the changes in Xavi's eleven finishing working. Clear dominance of Barça, enjoying most of the possession, although with Cádiz resisting.

Already in the second half and without changes in the two teams, the first clear opportunity was in the 54th minute for Sergio González's team, however, San Emeterio's volley taking advantage of a loose ball in the area went through the roof. Only a minute later, FC Barcelona managed to unclog the situation in front of goal and it was the Dutchman Frenkie De Jong who sent the ball into the net of the goal.

The midfielder finished off coming from behind at pleasure after Gavi's umpteenth appearance in the area, shooting a clearance that Raphinha saw, so that the Spanish midfielder put her back. Ledesma managed to touch the ball leaving it dead, which the Dutchman took advantage of. The long-awaited 0-1 caused Xavi to move the bench to prolong this success with three heavyweights. Thus, he made a triple change, removing Ferran Torres, Memphis and Gavi from the field, to bring in Pedri, Dembélé and Lewandowski.

Sergio González also made a move, taking Álex Fernández and Alejo off the pitch and bringing in Alarcón and Bongonda. However, it did not have a positive effect on his team, because just five minutes later, in the 65th minute, Lewandowski scored his sixth goal in the championship to place himself top scorer.

The azulgrana team went on a counterattack towards the goal defended by Ledesma led by Bellerín, who saw Raphinha on the right. The Brazilian put the ball in the box but De Jong couldn't finish it off between two defenders, leaving the ball in the small box. Barça's '9' went with everything to make it 0-2.

The tranquility of the result gave more ease to Xavi's team, who found more spaces and connected with the men up front more easily. They also benefited from a more daring Cádiz, although without a prize in what has been their fifth consecutive game without seeing the door this year.

With less than ten minutes remaining, Del Cerro Grande stopped the match due to a health problem of a fan in the Nuevo Mirandilla stands. Moments of tension were experienced while the medical team attended to that person, who after more than half an hour left the stadium to go to the hospital with a pulse. The game thus resumed at 9:05 p.m.

After a restart, FC Barcelona had time to score another two goals to round off the win. The 0-3 was made by Ansu Fati, who jumped onto the field in the 72nd minute, taking advantage of a pass from Robert Lewandowski, while it was Dembélé who made it 0-4 with a shot from the edge of the field that Ledesma could not save.