Barça and the desire to grow from behind

The arrival of Koundé and Christensen raises the level and competition in the center of a defense that is still waiting for laterals. 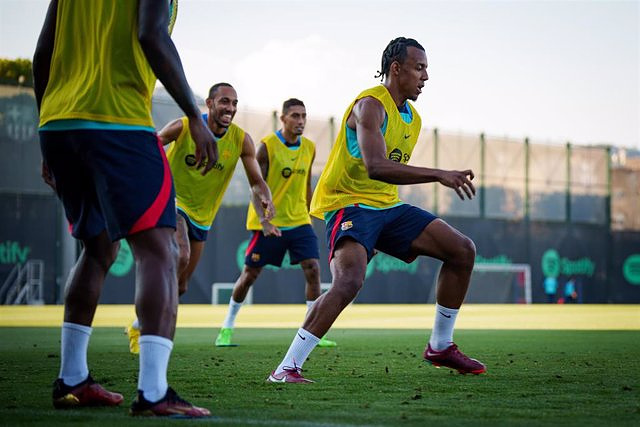 Every winning team must be a greased block and each line must be at its highest level so that the objectives, and more so if they are ambitious as they should be at FC Barcelona, ​​can be met. Hence, for this new season, the first complete for Xavi Hernández, a defense has been reinforced that did not give a sense of security in the past and that forced the team to seek too many comebacks.

Looking at last season, 9 goals conceded --and only 2 scored-- in the Champions League group stage separated Barça, once again, from the 'Champions' dream. In LaLiga Santander the 38 goals against, one per game on average, were not such a bad record, but the team, by far, was the best in the competition on the defensive side. It was the sixth best defense, surpassed by Sevilla (30), Real Madrid (31), Athletic Club (36), Betis (37) and Real Sociedad (37).

In a blank season, with nothing to celebrate, many put the focus of the disaster on a defense (also the goal) that was the team's 'black hole'. Bad exit of the ball, imbalances when throwing the offside and poor execution of the aids were seen many more times than expected. And it was even worse in terms of losses and 'sung'.

So as much as the team needs a goal, which is the sauce of football, and it has been reinforced very well with Robert Lewandowski and Raphinha, it was necessary to reach back and protect the back of the team. Without changes in the goal, with a Marc-André Ter Stegen forced to recover the great level that he had in the past and that he lost due to a limping injury, the bet had to be behind.

For now, the central defenders Andreas Christensen and Jules Koundé have arrived to reinforce a line that maintains the thriving Ronald Araújo, the international Eric Garcia and the veteran Gerard Piqué. In the absence of knowing if the French or the Uruguayan act as a full-back in case no one arrives or if Xavi bets on Sergiño Dest or Sergi Roberto there, there are five players for two positions, but they also open the door for the coach to play with three back with solvency.

Christensen and Koundé arrive endorsed by their good ball output and for being, above all, in their previous teams two defensive standards and two strongholds that are difficult to overcome. Two major reinforcements to try to weave a solid defense that ceases to be meat of 'meme' for the rival fans and also ceases to be the great concern of the 'culers'.

With the letter of freedom and with the fulfilled dream of being a Blaugrana, the Dane arrived, from Chelsea in the Premier League. At 26 years old and with more than 50 international caps, he must put the oldest central defenders in their place and provide real competition for Xavi and his teammates.

And if Lewandowski seemed to be the signing of the summer at Can Barça, there will be those who are more excited if possible with the arrival of Jules Koundé, 23 years old and who knows LaLiga perfectly, and who with Sevilla established himself as one of the best centers in Europe. Strength, placement, forcefulness, vision of the game and versatility define a footballer who does clearly point to the title.

But how do these two signings fit into the surviving defense? With Clément Lenglet leaving on loan, and with Samuel Umtiti continuing like every year on the starting ramp without finding anyone who wants to take over his services, both Christensen and Koundé will seek to gain a foothold among Gerard's veteran Piqué, the courage of Ronald Araújo and the good technique of Eric Garcia.

Without a doubt, the challenge will be enormous for Piqué, who at 35 years of age and in his twelfth season, opens his most difficult year in terms of guaranteed playing minutes. If he improves performance and is 'itched' by the arrival of reinforcements, it could be key, due to his experience and quality, or begin his decline as a 'culer'.

An Eric Garcia who was irregular and who did not meet the expectations created upon his arrival, with the addition that his presence in the World Cup in Qatar may be at stake, although it seems almost indisputable for Luis Enrique, will also have to increase his performance. For now, in the preseason, he has done it and has shone alongside Christensen.

In the absence of seeing what the end of the market holds, the black point in the defense continues to be the sides. Although Sergi Roberto has been renewed so that he can cover gaps in the midfield and on the right-hand side, the non-renewal of Dani Alves leaves Sergiño Dest as the only full-back, or winger, pure on the right wing.

In this pre-season Xavi Hernández has tested Ronald Araújo in that position, taking advantage of his stride and speed and that he knows how to cover his back well. Although with this option, in the long term, he loses depth and overflows on the wing at an offensive level.

The 'mercato' pointed to César Azpilicueta as a possible reinforcement, but the 'blue' captain finally renewed with Chelsea, while there are more problems on the left, where the options of Marcos Alonso or Sergio Reguilón are being considered for a position where he only appears a Jordi Alba (33) who year after year continues to be the undisputed starter but is increasingly discussed by his own fans.

With no one who can dispute the position, again, the hope is the youth squad Alejandro Balde, who has already made his debut with the first team (7 games last year) and who in this preseason, at 18 years old, has left a good taste of mouth

Although the preparation matches cannot serve as a scientific basis, from the friendly duels seen so far this summer, the first conclusion can be drawn that yes, this defense is better than the previous ones. And Jules Koundé, the key player in the new defensive gear, has not yet made his debut.

Of the five preparation games - the Joan Gamper Trophy is missing this Sunday against Dani Alves's Pumas - Barça has won three and drawn two. No defeat. In terms of goals, they scored 12 and conceded only 3. Against Real Madrid (0-1), Inter Miami (0-6) and New York Red Bulls (0-2) the goal remained clean, and only Olot ( 1-1) and Juventus (2-2) pierced this new defense that, in the absence of any other reinforcement, seems convinced to help a Barça that wants to be on the front line again.