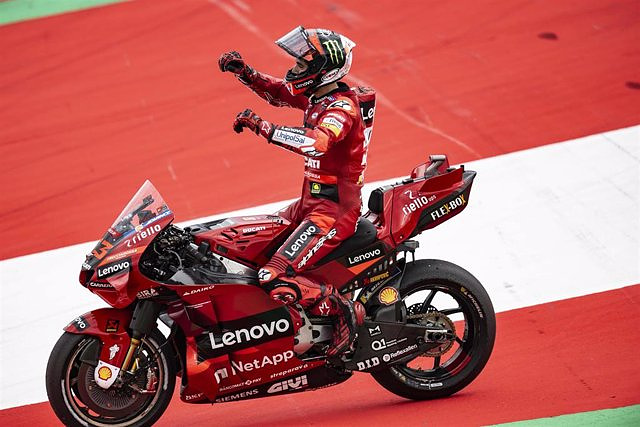 The Italian rider Francesco Bagnaia (Ducati) has achieved his fourth consecutive victory of the year after winning this Sunday in the MotoGP race of the San Marino Grand Prix, fourteenth round of the Motorcycle World Championship, in which the Spanish Maverick Viñales (Aprilia) has finished third and in which the Frenchman Fabio Quartararo (Yamaha) has strengthened his leadership of the premier class.

Winner at Assen, at Silverstone and at the Red Bull Ring, 'Pecco' has added a notch to his revolver this year to prevail, ahead of Enea Bastianini (Ducati) and Viñales, on a circuit where he already won last year and to rise to second place overall, 30 points behind Quartararo.

With this, he moves one place to Aleix Espargaró (Aprilia), who could only be sixth, one place behind Nice, this Sunday and who is now 33 units behind the lead.

In the last of the races at the Misano-Marco Simoncelli Circuit, the Australian Jack Miller (Ducati) defended his privileged position as soon as the lights went out in a rough start marked by the falls of men like Pol Espargaró (Repsol Honda), Frenchman Johann Zarco (Ducati) and Italian Michele Pirro (Ducati).

Marco Bezzecchi (Ducati), Franco Morbidelli (Yamaha) and Fabio Di Giannantonio (Ducati) also tested the gravel in the first few laps, in which the event took a turn when Miller fell when he was leading, which left the head open race.

Bagnaia, who started fifth, took the lead and began to push with Maverick Viñales (Aprilia) close by and Enea Bastianini (Ducati) observing everything a little further away. The transalpine and the one from Roses engaged for several laps in a fierce fight that was joined by the Gresini Racing team after breaking the absolute Misano lap record set by 'Pecco' himself in 2021.

With that excellent pace, Bastianini managed to overtake the Spaniard with six laps to go and start stalking his next teammate on the Ducati Lenovo. However, 'Pecco' knew how to defend himself until the last laps, where his compatriot was about to take advantage of the slipstream on the finish straight to overtake him.

Among the Spaniards, in addition to the third place for Viñales and the sixth for Aleix Espargaró, Alex Rins (Suzuki) finished seventh, Jorge Martín (Ducati) did it ninth, just ahead of Alex Márquez (Honda), and Raúl Fernández (KTM) was thirteenth.