He says that if the "coup d'état" in Catalonia "goes free, it will be repeated" and he is not surprised that Sánchez presents himself as an "accomplished exhumer". 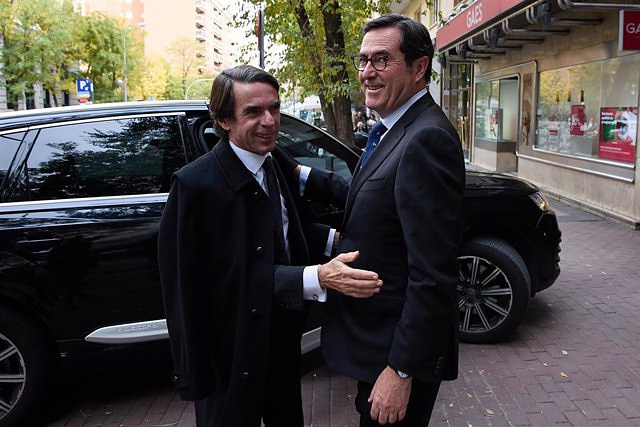 He says that if the "coup d'état" in Catalonia "goes free, it will be repeated" and he is not surprised that Sánchez presents himself as an "accomplished exhumer"

The former President of the Government, José María Aznar, has warned that Spain is going through a "constitutional crisis" and believes that it could "end up in a constituent process." ", he asserted.

And he has pointed out that questioning the Transition to democracy is a "first magnitude" political error because whoever attacks it questions the legitimacy of the system in which he acts as a representative.

Likewise, he has denounced the "growing" interventionism of the State, the current pension system, which he does not see as "viable", or the absence of a family policy to deal with the aging of the population.

Asked about Catalonia, Aznar considered that what there is is a problem among Catalans, on the basis that there lives a "kind of melancholic loop from which one never gets out and has to get out": "Because it only leads to failure and frustration", since "it consists of wanting to be what has not been and there is no solution because you will not be", alluding to independence.

In his opinion, if a "coup d'état" takes place and it goes wrong, the rest of Spaniards do not have to pay for "their mistake". "If it comes out for free, the actions will be repeated," he warned.

He has specified that in Catalonia there is a problem of non-respect for the law, which cannot be "jumped into bullfighting". "You cannot not respect the sentences of the Constitutional Court or the Rule of Law. When a country receives a coup d'état and that is free, that happens again. That we keep it in mind", he finished off his warning.

In addition, he affirmed this Wednesday that in Spain there is a "shortage of responsible leadership" because common objectives are not shared and he has assured - although without expressly citing the current head of the Executive, Pedro Sánchez - that he is not surprised that he presents himself as an "accomplished exhumer", after Sánchez said this week that he will go down in history for having removed the remains of Francisco Franco from the Valley of the Fallen.

"If we tell our leaders that we want entertainment, then we cannot be surprised if they behave like entertainers or, in modern times, like 'followers,' 'influencers,' or even as consummate exhumers," said the former Prime Minister at the inauguration from a CEOE public leadership course.

Aznar has maintained that "very strong leaders today are not in abundance", among other things because attempts to take on the real challenges facing the country "are obstructed by a combination of crude cynicism and narrow partisanship", and given that each appeal to unity runs up against "a wall of ingratitude".

He had previously criticized – and again without mentioning anyone in particular – that in current politics "there is a fairly large army that is dedicated to doing things that can be perfectly improved."

"We are facing a vacuum of civic virtues and a shortage of responsible leadership" in the midst of a "democratic uproar", has proclaimed Aznar, for whom the greatness of a politician is linked to moderation, which in his opinion is the most difficult of the virtues, since it marks the difference "between the statesmen and the prophets".

In this sense, the former president has pointed out that society should "learn to take itself seriously thanks to the leadership of statesmen who begin by taking themselves seriously."

Aznar has explained that moderation is more difficult in democratic contexts, because in a democracy it is necessary to contain not only the action of the elites, but also "the passions of the public." The leader has to think first of the common good and "always" stray a bit from the mainstream of his time, something that "with the Twitter crowd is more difficult than ever," he added.

The person who was a tenant of the Moncloa Palace between 1996 and 2004 has recommended that a political leader should dedicate time to analysis and reflection, focusing his work on designing "common objectives" and not so much on "the destruction of the adversary".

"To govern is to assume responsibility in the first person, not to endorse it to third parties, which is one of the fashions of the times we live in", Aznar summed up when saying that a government in emergency situations such as the one experienced in recent years with the coronavirus pandemic coronavirus what he has to do "is not to communicate but to govern".

Without leaving the context of the pandemic, the former 'popular' president has said that it was a breeding ground for "replacing consensus with the mandate" and for radical parties to seek to establish "a provisionality from which in many cases there is no return ".

Aznar has indicated that this situation has occurred in Spain during the pandemic with the Government due to the presence of a "populist party" such as Podemos. "We have witnessed the use of exceptional situations to launch a typical populist discourse that normalizes situations announced as transitory, for example the expansion of the public sector," he denounced.

‹ ›
Keywords:
Aznar
Your comment has been forwarded to the administrator for approval.×
Warning! Will constitute a criminal offense, illegal, threatening, offensive, insulting and swearing, derogatory, defamatory, vulgar, pornographic, indecent, personality rights, damaging or similar nature in the nature of all kinds of financial content, legal, criminal and administrative responsibility for the content of the sender member / members are belong.
Related News