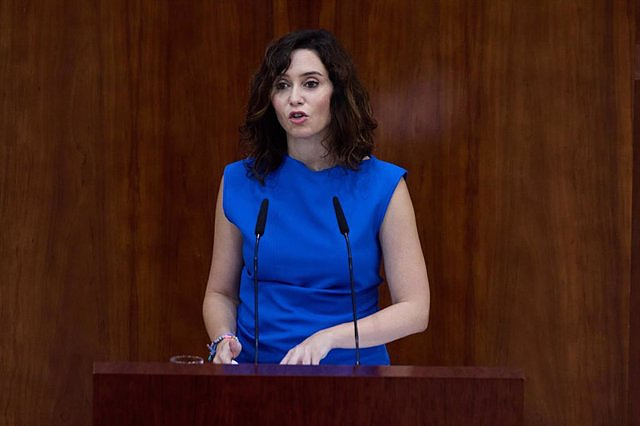 The president of the Community of Madrid, Isabel Díaz Ayuso, announced this Monday, during the Debate on the State of the Region, new tax deductions to "promote birth, maternity and paternity and help families", as well as a 'rate zero' for freelancers the first year.

Specifically, the Madrid leader has advanced that she will approve a deduction for the acquisition of a habitual residence motivated by the birth or adoption of children; another for large families, who will pay only half of the regional IRPF quota for 3 years or will be exempt, in the case of those of a special nature; and a third deduction for the payment of mortgage interest for those under 30 years of age.

"The bonuses in the Inheritance and Donations Tax of the fostered and protected minors have also been equated with the descendants," continued the head of the Madrid Executive from the Madrid Assembly.

In relation to this tax, he has advanced that he is going to "extend to 25% the bonuses in the Inheritance and Donation Tax between brothers, uncles and nephews".

Likewise, the existing deductions will be extended, with the aim of improving the purchasing power of the people of Madrid. Deductions will also be introduced for the care of ascendants, for the expenses derived from renting houses, and for the payment of interest on loans for undergraduate, master's or doctoral studies.

In addition, the Community of Madrid will improve deductions for language teaching expenses; for the care of children under three years of age, which extends to the care of elderly dependents and people with disabilities; and for investment in the acquisition of shares and social participations of new or recently created entities, in which the deduction percentages are increased.

"Closing the fiscal chapter, I announce that in Madrid the new self-employed will not pay the fee. Our flat rate will become a 'zero rate'. This will be during the first year, which is the most difficult to start a business. And During the second year, neither will those who invoice below the minimum interprofessional salary," Ayuso detailed.

On the other hand, he has claimed that "Madrid industry is one of the relevant sectors" and has announced that they are going to launch "a plan for industrial estates to which we will allocate 5 million euros, twice the current figure".

In addition, they will modify the bases of the calls to facilitate their access and will eliminate any bureaucratic barrier that makes it difficult for industrial companies to benefit from the support provided by the Community of Madrid.

"This government's commitment to deregulation is absolute. In addition to the work that is already being done with the Open Line against Hyperregulation, we will include in the approval of the Omnibus Law different measures aimed at this same end," the president explained.

Lastly, regarding the ministry headed by Javier Fernández-Lasquetty, the launch of "a technology fund for trade" has advanced. In this sense, he has outlined that they will support "small businesses with a new program endowed with 12 million euros aimed at promoting their digitization".

"Each small company or trade association will be able to finance projects that digitally transform their business with up to 200,000 euros, either through the creation of applications, data analysis or the incorporation of new technologies in their establishments or in the management of their business", has concluded.

‹ ›
Keywords:
Díaz Ayuso
Your comment has been forwarded to the administrator for approval.×
Warning! Will constitute a criminal offense, illegal, threatening, offensive, insulting and swearing, derogatory, defamatory, vulgar, pornographic, indecent, personality rights, damaging or similar nature in the nature of all kinds of financial content, legal, criminal and administrative responsibility for the content of the sender member / members are belong.
Related News