Atlético punishes Celta with a win

Atlético punishes Celta with a win. 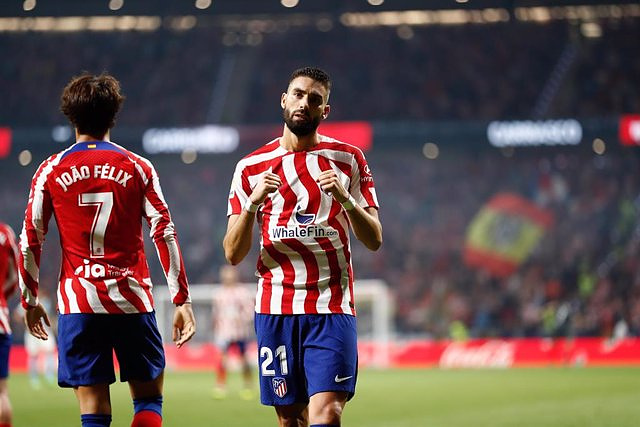 Atlético punishes Celta with a win

Atlético de Madrid thrashed RC Celta this Saturday (4-1) to achieve their first victory at the Cívitas Metropolitano this season in the League, in a match in which the rojiblanca's effectiveness made the difference and with Ivo Grbic in goal against the Jan Oblak's last-minute withdrawal, while Celta leaves Madrid with the feeling of having suffered too much punishment for the game shown.

Correa, De Paul, Carrasco and Núñez's own goal allowed Atlético to collect all three points to add ten in five games to climb to fourth position in the table. The rotations went well for Simeone, who gave rest to Joao Félix, Giménez, Koke, among others. Celta, who have not beaten Atleti since 2018, break their good streak and are eleventh with seven units.

The match began with Atlético disconnected and in minute 2 they already suffered Celta's first warning. Hermoso measured poorly and Larsen took advantage of it to stand up to Grbic in a one-on-one that he didn't finish, in one of the clearest chances for the Galicians in the first half.

The high intensity of Coudet's men continued, who enjoyed another opportunity after a corner that Hugo Mallo headed from close range near the small area. And again Grbic responded wonderfully to avoid the 0-1 with a reflex stop, without feeling the pressure that Oblak's figure always supposes.

Celta's start was almost immaculate, only with the goal as the only reproach. The rojiblancos were still planted with a defense of four despite recurrent errors in defense and in the 9th minute Ángel Correa reassured the mattress parish with a great goal after a good combination on the right. Lemar changed the game from band to band, Molina served De Paul, who assists the Argentine, who takes great advantage of his first start this season.

Celta was not daunted by that goal, on the contrary, and just a minute later Iago Aspas, who did not have his most colorful game, sent the ball to the post with a powerful shot from the edge of the box, after the umpteenth mistake of a bad Beautiful at the start of the duel. Thus, effectiveness and success made the difference in the game, with Atlético not very bright but more practical.

Still in the first half, Atlético continued to lead on the scoreboard without too many problems, although with a tense calm, due to the short result. Morata, somewhat duller than usual, had a couple of approaches, one of them behind a nice wall with Correa, but he did not finish materializing his opportunities.

Neither could he convert any of his chances before the break, with Larsen and Aspas as the most active, but the lack of success killed the Galicians, who had scored any of their chances would have completely changed the script of the game, always even in game and not on the scoreboard.

Already at the break, the rojiblancos only took five minutes to extend their short lead and make it 2-0. Koke, who had come on after the break, left the ball facing De Paul, who caressed the ball gently and lovingly on the inside to, fortunately hitting a defender, send the ball into the back of the net . This second goal gave Simeone's men more security and peace of mind, who had already changed to three-point defense to adjust his defense, which was somewhat disconnected today.

Apparently so far in the game, it was too much punishment for a very correct Celta and with hardly any mistakes, only harmed by his lack of success. Morata was able to make the third after a great play in the 60th minute, which Aidoo left well, but then he didn't assist well and sent the ball into the hands of Marchesín.

Only six minutes later Carrasco continued to delve into Celta's wound with the 3-0. The Belgian already controlled a long ball from Koke in the Galician field and began a great gallop down the left to penetrate the area with great speed, cut the defender and shoot Marchesín, defining the short post with a whiplash and a lot of rage.

Celta, already with Solari and Veiga on the pitch, went about their business and finally got their reward. Veiga himself received a pass from Aspas, always influential, in the area and surprised Grbic to get Celta into the match. The illusion of a comeback did not last long for the Galicians, because in the 83rd minute it was 4-1 with an own goal by Núñez after a good individual play by Cunha, who entered for De Paul. Celta had the last one a minute later, but Larsen, desperate, did not materialize it.