Atlético collapses at the end

Atlético collapses at the end. 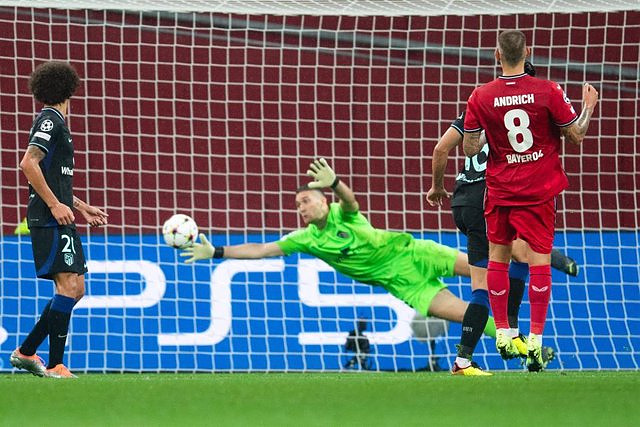 Atlético collapses at the end

Diego Pablo Simeone's men could not scratch anything positive from Germany, after another somewhat irregular game, where they did not have excessive arrivals nor were they able to take advantage of the moments in which they were superior against a rival that enjoyed almost all the best chances and who found a prize in the last minutes where he dismantled the visitors.

Andrich, in the 84th minute, and Diaby, in the 87th, gave the three points to the Bundesliga team, which found some relief from a poor start to the season and was much more vertical than an Atlético team that did not work this time the changes introduced by the 'Cholo' to find the three points.

The Argentine was finally unable to count on Jan Oblak in goal and gave Felipe a chance in defense by moving Reinildo to the left lane, and opting to place Saúl Ñíguez in the middle along with Koke and Marcos Llorente. But it was Joao Felix's talent and quality that allowed him to be dangerous in the first half without too many chances and with Bayer trying to be aggressive.

Gerard Seoane's men were not afraid of the visitors, but they lacked quality to generate danger. Atlético wasn't very dangerous either, although they did have a great chance in a shot very close to Mario Hermoso's goal. The ball reached the central defender preceded by a clear hand from a defender, although neither the Englishman Michael Oliver nor the VAR determined that it was a penalty due to some disbelief in the mattresses. A shot by Felipe and a shot by Demirbai that went close to the post were the other most relevant occasions in this first act.

On the other hand, the second was much more open and there were more opportunities, especially for the German team that was able to take the lead shortly after the match resumed with a very clear double chance. An error in Felipe's exit meant that Schick was left alone against Grbic, but his shot hit the crossbar and the subsequent clearance sent him to the post with a header from Hlozek.

Despite this start, Atlético knew how to take the game to their field and after the hour, Simeone looked for a little more offensive 'punch', diminished when Joao Felix disappeared somewhat and the little participation of Álvaro Morata. Carrasco, for Reinildo, and Griezmann, for Nahuel Molina, were the options and at times they had an effect.

Even without being a real threat to Hradecky, who only had to put a hand to a shot from De Paul, who had entered the break for Saúl, the visitors took control of the match until Leverkusen woke up and their changes worked better. Schick, after several rebounds, had another chance, but after beating Grbic he couldn't avoid Felipe's crossing to the limit.

However, that warning and Frimpong's entry gave the locals another march, which took the pulse of the game again and ended up taking it with two 'electric' plays, both led by the Dutchman, executed by Andrich and by Diaby in the space of three minutes and that left Simeone's men unanswered.

‹ ›
Keywords:
Champions LeagueAtlético De MadridBayer
Your comment has been forwarded to the administrator for approval.×
Warning! Will constitute a criminal offense, illegal, threatening, offensive, insulting and swearing, derogatory, defamatory, vulgar, pornographic, indecent, personality rights, damaging or similar nature in the nature of all kinds of financial content, legal, criminal and administrative responsibility for the content of the sender member / members are belong.
Related News