Atlético breaks its streak in the Metropolitan with agony

Atlético breaks its streak in the Metropolitan with agony. 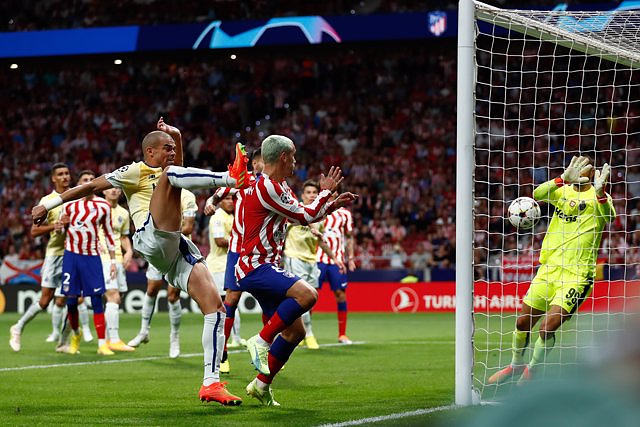 Atlético breaks its streak in the Metropolitan with agony

Atlético de Madrid started the 2022-2023 Champions League with an agonizing 2-1 victory against the Portuguese Porto, after a gray game for the rojiblanco team that was resolved in the eleven minutes of extra time, where they saw each other between 92 and 101 the three goals of the match.

Diego Pablo Simeone's team had gone seven Champions League games without winning at home at their stadium and was close to being one more because in the 92nd minute the scoreboard reflected 0-0. Then, Mario Hermoso appeared, the protagonist a few weeks ago for confronting two 'fans' who insulted him after the clash against Villarreal, and it seemed that his goal would give the victory.

However, the centre-back himself would soon be the protagonist of an inopportune handball in his area that allowed Uribe to equalize the visitors, but the match, not excessively brilliant, still had more emotions. Antoine Griezmann, in a corner kick, resolved at the second post and gave three points and a joy after a little fine match of his.

As expected, Atlético found many complications to dismantle Porto. He tried it in a rhythmic start to take control, but he lacked precision in the final meters, especially with his two lanes, a Nahuel Molina who returned to eleven and a Yannick Carrasco who left his position in the middle this time to Saul Niguez.

The locals could not find Álvaro Morata, while Joao Felix lacked that greater regularity in the game that Simeone demands of him. The Portuguese, as usual, left flashes, but ended up colliding almost always with his compatriot Pepe, once again 'chief' of a defense that he did not suffer excessively in the local attacks.

The double European champion, supported by Galeno's ride on the left, was little by little managing to balance the duel and keeping possession, although he did not carry excessive danger beyond shots from outside that did not bother a recovered Oblak for the duel of his blow at the Reale Arena.

The Slovenian also blocked Evanilson's angled shot and didn't have much more work to do, although perhaps a little more than Diogo Costa, whom only Koke tested with a loose and centered shot and with which he could have gotten more. The last scare of an even first half was away after Taremi got rid of Giménez well to get into the area and then couldn't find a finisher to his dangerous pass.

The 'Cholo' once again tried to find tactical solutions to improve his team's performance and put Lemar and De Paul through his two lanes, but, despite Koke's disallowed goal, he couldn't get his team to 'plug in' and that allowed the Portuguese team was growing in this second act.

The occasions had only one direction, Oblak's goal, who had to put a good hand to another shot from outside Eustáquio, who shortly after threatened again in the same way. Joao Mario was about to surprise with an arrival at the far post that did not catch the goalkeeper off guard, who had to be quick once again in his area to prevent Evanilson from comfortably finishing off a lost ball in the area.

Atlético and Simeone had somewhat lost their way. The Argentine coach had changed to a four-man defense and had to bring in another defender (Hermoso) to recover the line of three central defenders. The public also showed their anger with the withdrawal of Joao Felix, who disappeared in the second half in an rojiblanco offensive network that had not even improved Antoine Griezmann's entry.

The long medical attention to Otávio somewhat cut the rhythm of Sergio Conceiçao's men, who also stayed for the final stretch with ten due to the expulsion of Taremi, who saw two yellow cards in ten minutes. Then came the madness in the extension of more than ten minutes and the end of the European streak at home.