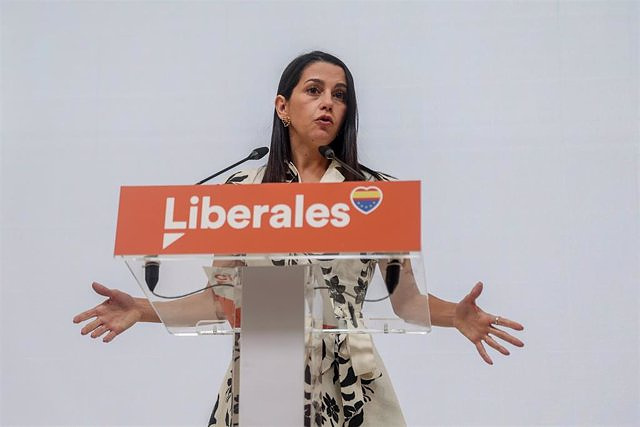 The president of Ciudadanos, Inés Arrimadas, has blamed the PP for what she considers a "daily circus" of Vox in Castilla y León and for the actions of the vice president of the Board, Juan García-Gallardo, who this Tuesday insulted the attorney 'orange ' in the Cortes, Francisco Igea.

Specifically, García-Gallardo called Igea an "imbecile" on Tuesday, during an intervention in defense of an interpellation on transparency. The prosecutor responded to the vice president that he is a "shame" for Parliament and received the support of several visible faces of Ciudadanos, such as Edmundo Bal and Begoña Villacís, among others.

"Every day he gives a different show," Arrimadas commented in the corridors of Congress, noting that the regional vice president's attitude is "lack of respect" towards the citizens, who in his opinion have lost "a lot" because Ciudadanos has left the regional executive.

For Arrimadas, the PP does not care "exactly" about the autonomous community, recalling that the regional president, Alfonso Fernández Mañueco, governed the region with Ciudadanos but decided to dissolve the Cortes and now has Santiago Abascal as a partner. In this sense, he has compared the "management and responsibility" of the Igea directors during his time in the Junta de Castilla y León with the "daily circus" of Vox in the Autonomous Community.

‹ ›
Keywords:
PPCiudadanosInés ArrimadasVOXFrancisco Igea
Your comment has been forwarded to the administrator for approval.×
Warning! Will constitute a criminal offense, illegal, threatening, offensive, insulting and swearing, derogatory, defamatory, vulgar, pornographic, indecent, personality rights, damaging or similar nature in the nature of all kinds of financial content, legal, criminal and administrative responsibility for the content of the sender member / members are belong.
Related News