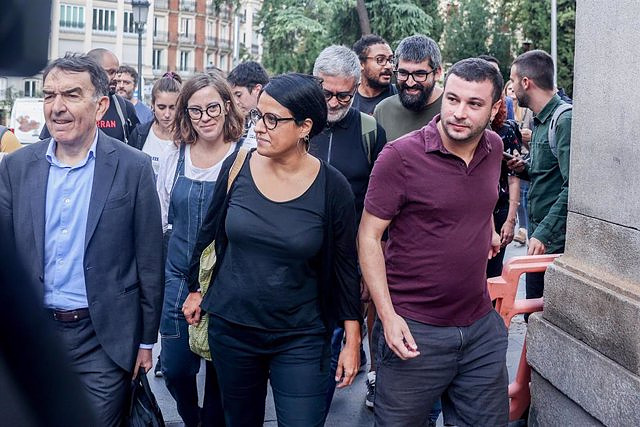 The former deputy of the CUP in the Parliament of Catalonia, Anna Gabriel, denied this Wednesday before the Supreme Court that she had committed an alleged crime of disobedience for her alleged involvement in the Unilateral Declaration of Independence (DUI) of Catalonia and has assured that she hopes that the cause that is followed in the court based in Madrid is filed or sent to a court in Barcelona.

Gabriel has gone this Wednesday, at 11:30 am, to the Supreme Court to testify before Judge Pablo Llarena as a defendant. She has appeared accompanied by a delegation led by María Sirvent (CUP) and Oriol Junqueras (ERC). Also present were deputies Jaume Asens (United Podemos), Gabriel Rufián (ERC), Josep Pagès (Junts), Jon Iñarritu (EH Bildu), Néstor Rego (BNG), and senators Sara Bailac, Mirella Cortès and Adelina Escandell, among others.

The former CUP deputy has been summoned after she surrendered to the High Court on July 19, after spending four years on the run in Switzerland after being prosecuted in 2018 for her alleged participation in the DUI. Given Gabriel's decision, the judge in charge of the 'procés' investigation annulled the declaration of rebellion that weighed on the former deputy. On that occasion, he agreed to release her and advanced that he would summon her to take her statement.

According to legal sources present at the interrogation this Wednesday consulted by Europa Press, Gabriel has appeared for just under half an hour before Judge Llarena, the Prosecutor's Office, the State Attorney's Office and the popular accusation exercised by Vox. The leader has refused to answer the questions of the legal services of the State and those of the formation led by Santiago Abascal.

The same sources have specified that the Public Ministry has asked the former deputy if in 2017 she received any requirement from the Constitutional Court in which she was warned that she could not promote a parliamentary initiative that would lead to the independence of Catalonia. Gabriel has replied that she did not, that she did not receive any notification and that, therefore, she would not have committed the crime of disobedience attributed to her.

Gabriel has left the High Court and, again accompanied by pro-independence leaders, has attended the media in Catalan. She has, however, refused to answer journalists' questions.

"We hope that the case will be archived or sent to Barcelona," he said after explaining that the investigative statement this Wednesday has focused "exclusively" on whether the Constitutional Court had requested him directly in relation to his parliamentary activity.

Along the same lines, she has indicated that her "principles" remain "intact" and has reminded the people who --according to her-- have gone into exile, have gone to prison or have been prosecuted for 1-O.

In this sense, he assured "the judicialization of what is a legitimate aspiration of a people would never have had to take place, repression creates pain".

After Gabriel's brief intervention before the press, the spokeswoman for the National Secretariat of the CUP María Sirvent has specified that no precautionary measure has been imposed on the former CUP deputy beyond being available to the court.

Thus, he has indicated that Gabriel has "professional and militant commitments in Switzerland", so he will continue to reside there. And he has explained that it will be Judge Llarena who will have to decide if he transfers the case to a court in Barcelona.

Vox has also given statements to the press at the exit and has accused Gabriel of lying in his appearance before the Supreme Court. The general secretary of the party, Javier Ortega Smith, has wondered how the former deputy of the CUP has been able to affirm before the judge that she was unaware of the resolutions of the Constitutional Court that prohibited the Parliament from advancing with the laws for the independence referendum on October 1 of 2017.

For Ortega Smith, Gabriel had "perfect knowledge and was perfectly notified" of the illegality of these initiatives both by the media, where it was "public and notorious", and by the Parliamentary Board. "In addition, she acted as a spokesperson" for the CUP and "had signed the presentation of those laws calling for an illegal secessionist referendum", she has contextualized her.

In addition, he has indicated that his party will appear against the leaders of the 'procés' "escaped" and still without trial, such as Carles Puigdemont, in whatever court it may be.

‹ ›
Keywords:
Tribunal SupremoCUPDUIAnna Gabriel
Your comment has been forwarded to the administrator for approval.×
Warning! Will constitute a criminal offense, illegal, threatening, offensive, insulting and swearing, derogatory, defamatory, vulgar, pornographic, indecent, personality rights, damaging or similar nature in the nature of all kinds of financial content, legal, criminal and administrative responsibility for the content of the sender member / members are belong.
Related News