Ancelotti: "The squad is very competitive, even without Benzema" 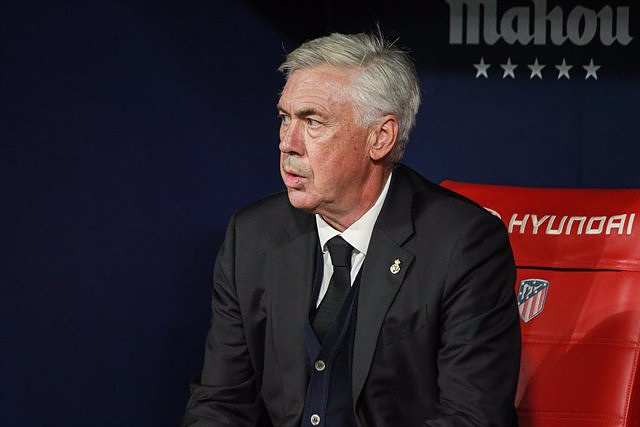 The Real Madrid coach, Carlo Ancelotti, highlighted this Sunday, after the victory in the Madrid derby against Atlético, that the Whites' squad is "very competitive, even if Benzema is not there", their "most important" player, at the same time who has been "happy" and "proud" of a team that reaches the national team break with nine wins in nine games.

"The team has replaced Karim well in these games, we've done well. Today it was Rodrygo's turn, he scored a spectacular goal. The health of the squad is very high," said the Italian at the press conference after the game. derby in the Cívitas Metropolitano.

The white coach insisted, as he did after beating Leipzig in the Champions League, that "he couldn't ask for more from this team." "The squad is very competitive, even without Karim (Benzema), who is the most important. And then there are things that can be improved, it's normal. We've won every game and we're very happy and I'm proud to coach these players," he asserted.

Given the words of the Atleti coach, Diego Pablo Simeone, praising Real Madrid's defensive capacity, Ancelotti accepted the "accomplished". "We have defended in a low block and we are used to it. We have removed the danger of breakage from the forwards, it has allowed us to control Joao Félix and Griezmann well", he added.

"In the first half we handled the exit from behind very well. We were very comfortable with possession, but in the second half we gave up the idea of ​​doing damage. It affected us a bit, we suffered, but it was well controlled. The end has been a suffering because Atlético has pushed and they have created problems for us", he analyzed about the duel, before making it clear that "perfection does not exist", when asked about the goals conceded, six so far in the League.

Asked about proper names, Ancelotti did not hesitate to praise the good moment of the match's two scorers, Rodrygo Goes and Fede Valverde, "very special players". "They are what a modern footballer has to be, they can play in different positions, and they stand out. They've both made a lot of progress and we're delighted", he commented, before assessing Vinicius's 'lambretta' with 0-2 on the scoreboard at the end of the match.

"I think the ball could be handled better in a difficult moment, but it's Vinicius, and his talent allows us to make it 0-2 and allows us to win this derby," he said of the Brazilian's variety of dribbling.

Finally, he warned of the danger of the World Cup in winter in domestic performance. "Barcelona is doing very well, like us, but this season is very strange, you don't know what could happen after the World Cup. What happens to Atlético could happen to us later, it's a more competitive league than last year. past", he reflected, before concluding emphatically assuring that "football belongs to footballers".