Ancelotti: "Real Madrid has always been and will be respected in the Champions League" 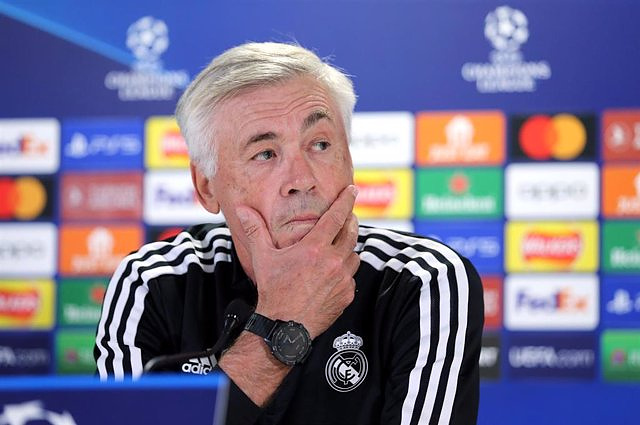 The Real Madrid coach, Carlo Ancelotti, recalled that his team "has always been and will be respected" in the Champions League and therefore does not attach too much importance to the fact that the initial forecasts do not place them among the main candidates in a competition where the goal will once again be "competing to the finish".

"In this competition, Real Madrid has always been and will be respected, not for what it has achieved but for the history of this club. We started with great enthusiasm, but you never know what is going to happen and we don't have to think about later in the group, that we have to go through and win it, and then let's see what happens after the World Cup", said Ancelotti at the press conference prior to the Champions League debut.

In any case, despite their status as champions, the bookmakers once again place the Madrid team out of the favourites. "I'm not surprised, I see it as a good sign because last year we had even less chances in the predictions. We are going to do what we did last year, compete until the end and hopefully we can compete in the final," he remarked.

"It's not an easy group. Celtic are doing very well and you have to respect them like Leipzig and Shakhtar. There can be surprises in the group, especially in the first half. Last year I remember that we lost to Sheriff, so I think it will be a balanced group", added the man from Reggiolo.

The Italian, who does not forget that Celtic Park has been a "difficult stadium with a fantastic atmosphere" for him in his career, since he has never won there, expects a difficult duel. "They have a good dynamic like us. It is a team that plays with a lot of intensity, but we are prepared to start the group well", he underlined.

"I know that Celtic are not going to change their style or their attitude on the pitch, they want to play attacking football and I'm not worried about the defense because we've already defended really well in the past," added the Madrid coach, who dropped that " yes, it may be" that there are rotations. "But I don't know which ones are the least common," he clarified with a smile.

Finally, he did not hide the particularity of a group stage that will be played in two months for Qatar 2022. "Until the World Cup we will not have problems. The players are ready, prepared and motivated to reach the World Cup. They are in good condition, then the doubt is later, how they will return, but it is something that cannot be known today," he warned.