Ancelotti: "Possession football is not as fashionable as it used to be" 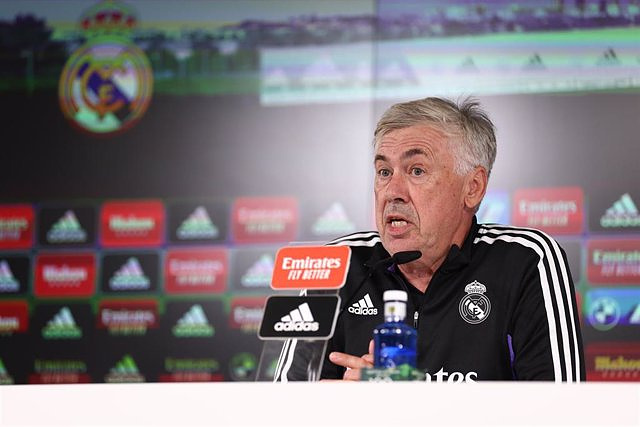 The Real Madrid coach, Carlo Ancelotti, has assured that possession football "is not as fashionable" as it was a few years ago and that now "verticality" is valued more, and has revealed that this Sunday against RCD Mallorca in the Santiago Bernabéu (2:00 p.m.) Belgian Eden Hazard, whom he is going to ask "no" to "score goals", will start.

"It may be a fashion that was there in recent years. Football is changing, there is more verticality. Possession football is not as fashionable as it was some years before," he declared at the previous press conference.

On the other hand, he explained that with the injured Karim Benzema they are going to "try to recover him without forcing". "He's not going to play on Wednesday, and we'll see if he plays the derby. If he doesn't play the derby on Sunday, he's not going with the national team," he announced. "These are things that can happen. He has had a small problem, just like last year in December. We supplied him well last year and this year as well. The team did very well without him and hopefully it can be repeated tomorrow," he said.

"We don't have the natural replacement for Karim, because he is the best striker in the world, but he can be replaced with other players with different characteristics," he said, recalling that Eden Hazard "has done well" when he had to replace him against Celtic. "Tomorrow I'm going to put him on and I hope he can play a good game," he said about the Belgian.

However, he assured that despite the loss of the Frenchman, the game system "is the same". "It could be that Hazard doesn't have Karim's scoring streak, but I'm not going to ask him to score goals, I'm going to ask him to play well like against Celtic. We don't have to lose the good streak, combining well, having mobility," he asserted.

In addition, the transalpine coach revealed that Dani Ceballos "might" start this Sunday, where the Belgian Thibaut Courtois will train under the sticks despite the "inconvenience" he has had this week. "Courtois has had a little problem with his knee, but he has trained. He is fine. It is true that the last few days he has not trained because he had discomfort, but tomorrow he will play," he insisted.

He also trusts the Brazilian Vinícius. "He must continue playing as he is playing, with the attitude that he has. He was decisive last year, he plays with continuity," he pointed out. "He is more continuous, he scores more goals, he fails less in front of the goal. He continues to maintain a good attitude, with a lot of humility, he wants to improve every day", he continued.

Finally, he warned of the danger of this Sunday's rival. "Mallorca in recent games has defended well, it has conceded three penalty goals. It is going to prepare a game to defend and look for a counterattack," he concluded.