'Anboto' once again stands apart from a frustrated ETA attack in Vitoria in 1985: "I have nothing to do with it"

He declares that he neither belonged to the gang nor was he in the Basque Country. 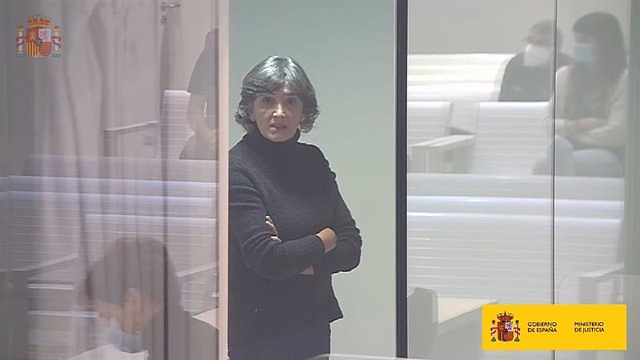 Soledad Iparraguirre, alias 'Anboto', has again denied this Monday at the National High Court (AN) that she participated in an attempted attack by ETA on May 21, 1985 in Vitoria, an attack that the Police thwarted when they learned of the place where the car bomb was planted. In the trial, which is repeated after the Supreme Court (TS) annulled her acquittal, the former head of the terrorist group has said that she did not join ETA until five years later and that at the time of the events she was not in the country Basque, but in France.

In her statement before the second court of the AN that judges her for these events, 'Anboto' has assured that she began "little by little" to work with ETA to do tasks such as translating, but that her effective entry into the terrorist organization was carried out in 1990: "They are not true and I have nothing to do" with this accusation, for which the Prosecutor's Office claims 488 years in prison for her, considering her guilty of wanting to kill, at least, 21 national police officers.

On the afternoon of May 21, 1985, at the Mendizorroza Sports Center in the Basque capital there was a football match between the teams from Vitoria and Lleida. The attack did not take place because the TEDAX located the car bomb, deactivated the explosives "at the risk of their lives" and destroyed them before a call was received advising of the place chosen by ETA.

The trial is being held again after the Supreme Court annulled the acquittal of 'Anboto' this year and ordered that it be repeated and another sentence handed down, considering that the first court of the AN omitted a fingerprint test "with an argument not rational".

‹ ›
Keywords:
Audiencia NacionalETATerrorismoTribunal SupremoVitoriaPolicía
Your comment has been forwarded to the administrator for approval.×
Warning! Will constitute a criminal offense, illegal, threatening, offensive, insulting and swearing, derogatory, defamatory, vulgar, pornographic, indecent, personality rights, damaging or similar nature in the nature of all kinds of financial content, legal, criminal and administrative responsibility for the content of the sender member / members are belong.
Related News