The Catalan, who suffered a hard fall in free practice, shone to finish sixth. 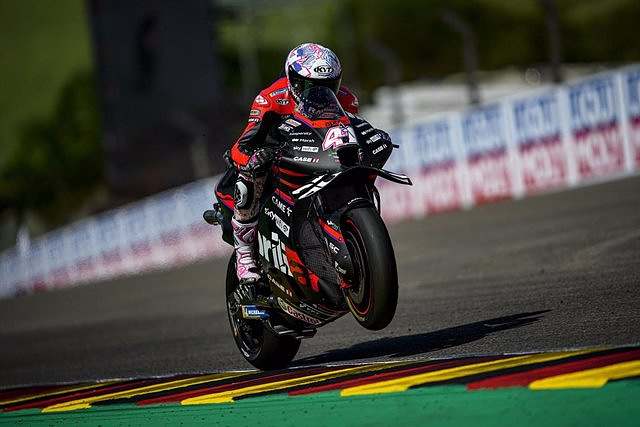 The Catalan, who suffered a hard fall in free practice, shone to finish sixth

Viñales will start second and the leader Quartararo, fourth

French rider Johann Zarco (Ducati) took pole this Saturday for the British Grand Prix MotoGP race, the twelfth round of the Motorcycle World Championship and the first after the summer break, while the Spanish rider Aleix Espargaró (Aprilia) will start sixth despite riding limping due to a hard fall suffered during the last free practice sessions.

In a session in which up to six riders managed to get below 1:58 and eight managed to break the circuit record, the rider from Granollers, second in the championship, 21 points behind the leader Fabio Quartararo (Yamaha), was able to recover from the bilateral contusion in both ankles that caused him the tremendous 'highside' of Free Practice 4, an incident at turn 12 that meant he had to be evacuated on a stretcher.

However, after receiving the 'ok' from the doctors, he returned to the track for a Q2 in which he became the first to beat the circuit record, set by the absent Marc Márquez in 2019. His 1:57.966 put him at the top of the time table with a minute to go, but the helmets began to turn red.

Previously, Jorge Martín (Ducati) had set the first benchmark at Silverstone two tenths off the best time of all time on the English track. Quartaro improved his time and Aleix snatched the privileged position, but it was finally Zarco who managed to take the cat to the water with an impressive 1: 57.767.

Next to him will start in the front row Maverick Viñales (Aprilia), second, and the Australian Jack Miller (Ducati). The leader Quartararo, fourth, will share a row with 'Pecco' Bagnaia (Ducati) and Aleix Espargaró.

In addition, Martín will start ninth, Alex Rins (Suzuki) will start eleventh and Joan Mir (Suzuki), twelfth. Among those who did not manage to get through Q1, Alex Márquez (Honda) will start twenty-third, Pol Espargaró (Repsol Honda) will do so twenty-fifth and Raúl Fernández (KTM), twenty-eighth.