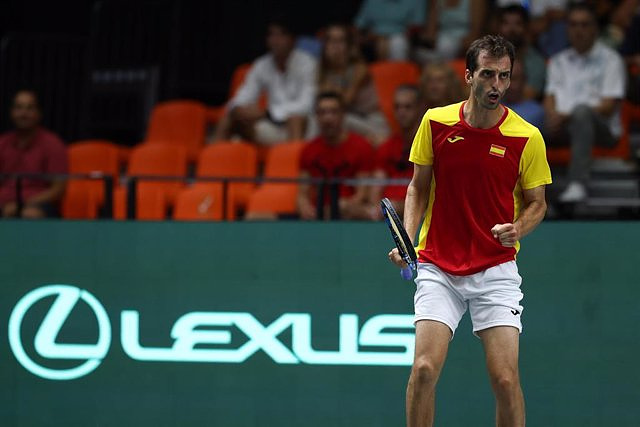 The Spanish team added its first point this Wednesday in its tie against Serbia, corresponding to the group stage of the Davis Cup Finals that Valencia is hosting, thanks to the long-suffering victory of Albert Ramos against Laslo Djere by 2-6, 7 -6(5), 7-5.

It took almost three hours for the Catalan, in charge of opening the duel in the absence of Carlos Alcaraz and who had not played the competition since 2018, to get rid of his rival, who had him on the ropes, but who ended up accusing physical problems that opened him up the door to Barcelona.

And it is that the Serbian, 66 in the world, gave a lot of 'war' and showed it from the beginning with a quick 'break' that settled him on the track of the Fuente de San Luis. Ramos had his only chance to recover this disadvantage in the next game, but he did not take advantage of it and was already unable to reply to the rhythm of Djere, who did not have many more complications to close the set.

Very different was the second, where the Spanish came out with everything from the first moment, giving a good example that the script was going to be different from the previous one. The Catalan got the long-awaited 'break', but Djere did return it to him afterwards, cooling the spirits of the stands somewhat.

The entire second round was much more even, although the Catalan was the one who dominated the rhythm and the one who seemed to have one more gear, although he was not able to distance himself on the scoreboard. The physical demand was also greater, with longer points and more meters covered by the two, which would end up taking its toll on the Serb. In the end, the 'tie-break' had to decide and the Barcelonan handled the tension to force a third and final set (7/5).

However, the Spanish tennis player did not start the last set in the best possible way and Djere, solid and aggressive, did not let him pass to make a valuable break. The match seemed to lean on the Balkan side when the Serbian suffered a muscular warning with 3-1 in favor. Viktor Troicki, their captain, managed to stop the game for a moment so that he could be attended to, which caused Sergi Bruguera to get angry, who reminded the referee that he had that possibility until the change.

In any case, that scare took its toll on the Serbian number two, who couldn't help but lose serve and the match was even. Ramos gained confidence for rallies, while Djere gradually managed to recover to continue to have options. But the initiative belonged to the Spaniard, who managed to break in the eleventh game and sentence with his service to give the first and vital point to Spain, and more calm to Roberto Bautista for his meeting with Miomir Kecmanovic.