The Moroccan minister reiterates the commitment to the opening of customs in Ceuta and Melilla, which will be prior to the RAN. 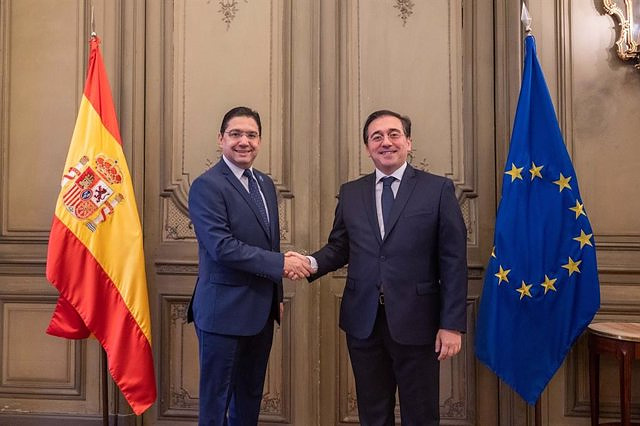 The Moroccan minister reiterates the commitment to the opening of customs in Ceuta and Melilla, which will be prior to the RAN

The long-awaited High Level Meeting (RAN) between Spain and Morocco could finally take place at the end of January or beginning of February, as announced this Thursday in Barcelona by the foreign ministers of both countries, José Manuel Albares and Naser Burita.

Both have held a working breakfast to review how the roadmap drawn up as a result of the meeting on April 7 in Rabat between the Prime Minister, Pedro Sánchez, and King Mohamed VI, is being implemented.

"It is being fulfilled point by point," Albares stressed, pointing out that the summit, provided for in the declaration signed by Sánchez and the Alaouite monarch, could take place "at the end of January or beginning of February." For this, agendas are being crossed so that it occurs "as soon as possible".

Burita has also placed the summit in that time horizon, the first between the two countries since 2015. In fact, the Moroccan minister has gone further and has indicated that "the last week of January or the first of February" is being considered. "We will be delighted to host the next summit", he assured.

The meeting "will not only be an opportunity to see that we have fulfilled all the points of the road map, but also to agree on new ambitious elements in our bilateral relationship", the Moroccan minister has advanced.

"As His Majesty has said, this is a new phase in the relationship and we are very happy and we will continue working with good spirit in all areas," he added, citing, among others, the fight against terrorism and illegal immigration.

Likewise, he congratulated himself on what is his first visit to Spain in three years and has once again reiterated Morocco's commitment to "comply with all the provisions" of the joint declaration, which includes the reopening of customs in Melilla, unilaterally closed in 2018, and the creation of a new one in Ceuta, where until now it did not exist.

Regarding this matter, Albares has indicated that the plan for "the first passage of goods by land to take place" is maintained, as both agreed in September that it would take place at the beginning of 2023. "Next week a technical meeting will take place in which will establish the date, which will be prior to the high-level meeting", the minister clarified.

This Thursday's meeting, the seventh between the two since April and the second this week since they met on Tuesday in Fez in a forum of the Alliance of Civilizations, has allowed us to review the different points of the road map and " see how to enforce the remaining items quickly," Burita said.

According to Albares, all the working groups provided for in the April 7 declaration are meeting, working and bearing fruit. Among them, he cited the 20% drop in irregular immigration via Morocco and the 30% growth in commercial exchanges. "We are both very satisfied with this new stage in the bilateral relationship and with compliance with the roadmap", he concluded.

‹ ›
Keywords:
Marruecos
Your comment has been forwarded to the administrator for approval.×
Warning! Will constitute a criminal offense, illegal, threatening, offensive, insulting and swearing, derogatory, defamatory, vulgar, pornographic, indecent, personality rights, damaging or similar nature in the nature of all kinds of financial content, legal, criminal and administrative responsibility for the content of the sender member / members are belong.
Related News