Albacete promoted to Second in Riazor

The La Mancha team comes back in extra time and leaves Dépor in the First RFEF. 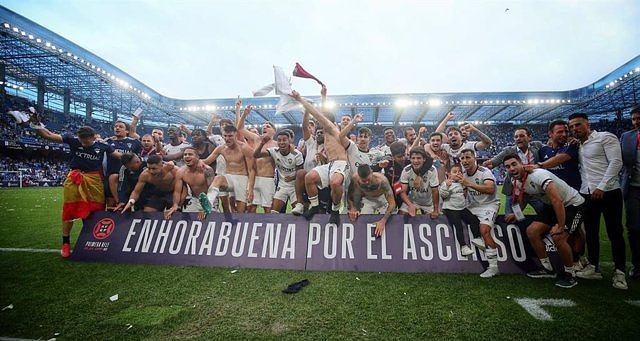 Albacete achieved promotion to LaLiga SmartBank this Saturday by beating Deportivo de La Coruña (1-2) in the final promotion playoff of the First RFEF, thanks to a goal by Jordi Sánchez in the 112th minute of the duel held in Riazor.

The thousands of Galician fans froze in the middle of June with the comeback from La Mancha. Dépor went into the break with Soriano 1-0, after 25 minutes, and was already savoring his return to the elite when in 82, Alberto Jimenez forced extra time.

In the event of a tie after those 30 more minutes, the Galician team rose by better position in the season than its rival, but Jordi, also a scorer in the previous round against Rayo Majadahonda, made the promotion among Spanish football classics.

Dépor, who mobilized thousands and had victory in their hands, aspired to return to professional football after two years in what was previously known as Segunda B, but it was Albacete who got the coveted ticket, a year after his decline.

‹ ›
Keywords:
Deportivo De La Coruña
Your comment has been forwarded to the administrator for approval.×
Warning! Will constitute a criminal offense, illegal, threatening, offensive, insulting and swearing, derogatory, defamatory, vulgar, pornographic, indecent, personality rights, damaging or similar nature in the nature of all kinds of financial content, legal, criminal and administrative responsibility for the content of the sender member / members are belong.
Related News