Post a Comment Print Share on Facebook
Famagusta 29
DOLLAR 17,96
EURO 18,54
GOLD 1.031,60
BIST 2.868,44
Dogecoin Spike Fuels Meme Token Economy to a Huge Jump of Close to 10%
Report: Only 5.3% Spanish Crypto Investors have been notified to declare...
Why casinos do not allow kids to gamble
Payments giant Stripe launches pilot to test crypto payouts with Twitter
Vlad Ponomarev, CEO of Broxus, on Everscale and the Development of a Universal...
Quik.com now has Minting of.VR and.Metaverse Domains
The Biggest Movers: APE Up Almost 30%, ZIL, and AAVE are Wednesday's...
Paul Farhi, founder of Solidus AITECH, talks about Artificial Intelligence...
Malaysia holds over 600 people for stealing electricity to mine cryptocurrency
Central Bank of Sudan warns of risks associated with cryptocurrency 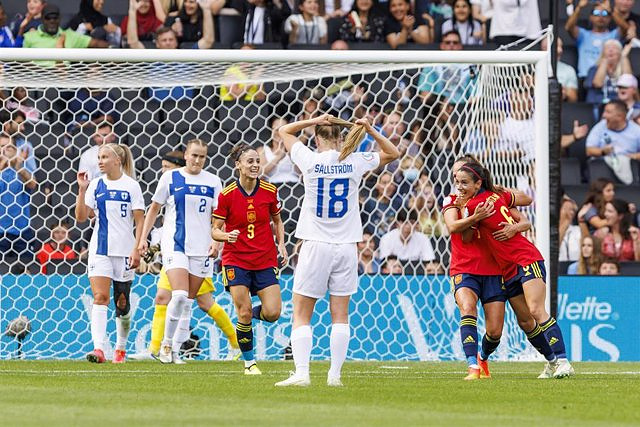 UEFA is looking for the best goal of the recent Euro 2022 in England and, among the 10 candidates chosen this Wednesday for the fans to vote for a winner, is the header by the Spanish Aitana Bonmatí in the win against Finland.

Bonmatí hit a perfect header into the top corner to make the Finns 2-1 near half-time, in Spain's debut in the tournament that would end 4-1 at Milton Keynes' MK Stadium.

The Barça player did not score more goals in the EURO, but her goal is among the 10 chosen by UEFA's technical observers, among whom, through the organization's website, the fans will choose the 'best goal' of the European Championship.

Among the candidates there are many ballots for the English, since the champion has goals from four of her players: Beth Mead, Alessia Russo, Fran Kirby and Ella Toone. In addition, the German Alexandra Popp, who missed the final due to a last-minute injury, is also a candidate with her two goals against France in the semifinals.

‹ ›
Keywords:
EurocopaFinlandia
Your comment has been forwarded to the administrator for approval.×
Warning! Will constitute a criminal offense, illegal, threatening, offensive, insulting and swearing, derogatory, defamatory, vulgar, pornographic, indecent, personality rights, damaging or similar nature in the nature of all kinds of financial content, legal, criminal and administrative responsibility for the content of the sender member / members are belong.
Related News