Aitana Bonmatí, chosen in the 'Ideal Team' of EURO 2022 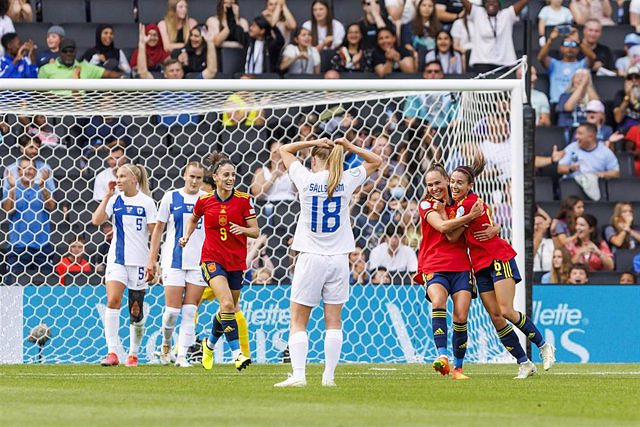 FC Barcelona midfielder Aitana Bonmatí is the only representative of the Spanish team in the 'Ideal Team' for the European Championship in England, in which there is total predominance of the German and English teams, runner-up and champion, respectively.

UEFA made public this Tuesday what would be for its panel of Technical Observers the best eleven left by the continental tournament that ended last Sunday and where Aitana Bonmatí has ​​entered, the only one of the chosen ones who did not reach the semifinals.

The Catalan player, chosen 'MVP' of the matches against Finland and Denmark, is one of the three midfielders selected along with the English Keira Walsh and the German Lena Oberdorf, who was also chosen as the 'Best Young'.

England, despite winning the title, also contributes goalkeeper Mary Earps, defender Leah Williamson and striker Beth Mead, 'MVP' of the tournament, while Germany even has one more player as it adds Giulia Gwinn to defenders and Marina Hegering, and forwards Alexandra Popp and Klara Bühl, both absent from the final due to injury and coronavirus. The French left-back Sakina Karchaoui completes this eleven in which the absence of the English Lucy Bronze is perhaps surprising.

‹ ›
Keywords:
EurocopaFútbol Club Barcelona
Your comment has been forwarded to the administrator for approval.×
Warning! Will constitute a criminal offense, illegal, threatening, offensive, insulting and swearing, derogatory, defamatory, vulgar, pornographic, indecent, personality rights, damaging or similar nature in the nature of all kinds of financial content, legal, criminal and administrative responsibility for the content of the sender member / members are belong.
Related News