He accuses the leader of the PP of not responding "firmly" to Sánchez and believes that the "popular" lately "are always wrong". 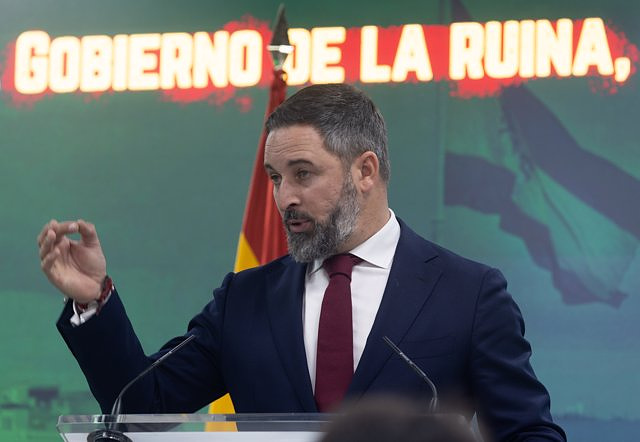 The leader of Vox, Santiago Abascal, has raised the tone this Tuesday against the president of the PP, Alberto Núñez Feijóo, for his response to the government's proposal to eliminate the crime of sedition and "flatly" reject joint actions against Pedro Sánchez, such as the presentation of a motion of censure or demonstrations in the streets.

In an interview on EsRadio, collected by Europa Press, Abascal lamented that Feijóo has rejected all his proposals, claiming that the PP's response will be articulated from "moderation". "Feijóo wants to stigmatize Vox as radicals," Abascal has censored, warning the leader of the 'popular' that he is making "a very serious mistake."

In this sense, he has asked the PP with what support he intends to carry out his proposals to maintain the crime of sedition in the Penal Code or to punish again the calling of an illegal referendum. "Who are you going to do it with? With the PNV?", he asked Feijóo, urging him to clarify if he wants the model of Castilla y León in agreement with Vox or prefers the one of Ceuta, where the agreement is with the PSOE " and Vox is demonized".

Abascal has explained that he likes to "reflect" on things and that is why he let the weekend go by to appear and put his response to the Sánchez government on the table. Faced with this, he has criticized that Feijóo spoke on Friday "to say nothing" and did so again this Monday to reject Vox's motion and "say that they are not going to respond from radicalism."

"The Government is bedridden with Bildu and with ERC, it destroys the State of rights and freedoms; and the parties that propose constitutional tools such as the motion of censure are called radicalism," criticized the leader of Vox, who has insisted that the PP "lately is always wrong."

"Radicalism was that of Feijóo in Galicia with measures during the pandemic that the courts knocked down, but not those who go to the Constitutional Court to defend legality, we have presented a motion of censure or we defend the Constitution," he insisted in his reproaches to the leader of the ' popular'.

Thus, he has insisted that Vox has put on the table the possibility of censoring Sánchez or the mobilizations in the street without the intention of having "prominence" and willing to agree on a consensus candidate or organize the concentrations jointly.

However, he has lamented that the PP "is wrong again" by "flatly" rejecting these joint actions, just as it was already "wrong" by voting against its motion of censure in October 2020 or agreeing with the Government to renew the Court of Accounts.

For this reason, he has insisted on requiring Feijóo to clarify what his pact policy is. "This is not Galicia, it's something else," he warned, pointing out that the PP "has a monumental mess" and must make it clear if he wants to govern with the support of Vox or prefers to do so with that of the PSOE or the PNV.

In his opinion, the solution is for citizens to give Vox "extraordinary strength" at the polls that allows it to "condition" the future government and avoid the "psychological problems" of the Popular Party.

Although this Monday he revealed that he had not spoken with Feijóo, he has assured that the communication between both parties does exist and has taken place in recent days, although they do not share "the recipes" to deal with the situation. "Communication can be useful from a formal or educational point of view, but nothing more. The PP's response has been very quick and thoughtless," he lamented.

"Feijóo and the PP, in the face of a coup d'état, instead of opposing with all the necessary firmness, call radicals and extremists those they can count on to contain the coup d'état," he reproached, insisting on the need to "clarify" before the citizens the relationship between the 'popular' and Vox.

In any case, Abascal has assured that he will not be "offended" and his hand continues to be extended to the PP. "After this reproach to the PP, I continue to hold out my hand to show unity in a possible motion of censure or go out together", he has offered warning that what he will not do is "contribute to the demonization of Vox".

‹ ›
Keywords:
FeijóoPedro SánchezSantiago AbascalPNVPPMoción De CensuraVOX
Your comment has been forwarded to the administrator for approval.×
Warning! Will constitute a criminal offense, illegal, threatening, offensive, insulting and swearing, derogatory, defamatory, vulgar, pornographic, indecent, personality rights, damaging or similar nature in the nature of all kinds of financial content, legal, criminal and administrative responsibility for the content of the sender member / members are belong.
Related News