Sánchez underlines that he will provide a response to the consequences of the war in Ukraine "consistent" with the climate emergency. 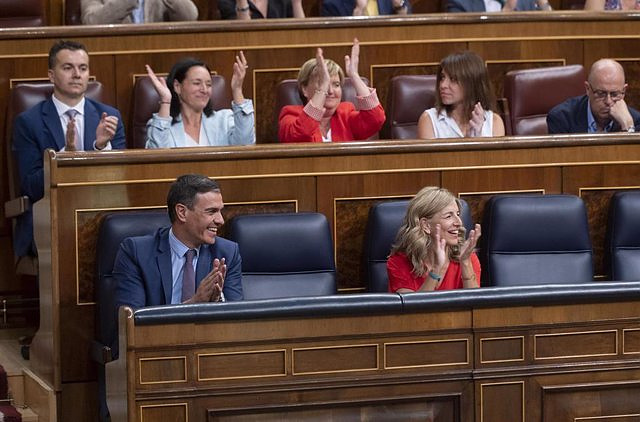 The leader of Vox, Santiago Abascal, has challenged this Wednesday the President of the Government, Pedro Sánchez, to call a referendum in which the Spaniards can pronounce on the energy model and exploitation of resources that they prefer, before which the head of the Executive has accused Vox of denying the climate crisis.

In a 'scuffle' in the plenary session of Congress, Abascal has denounced that the Government renounce the exploitation of the energy resources that Spain has, such as nuclear power plants or coal-fired power plants, and has challenged him to know the opinion of citizens through the calling of a referendum.

"This government is going to continue to provide a response to the energy crisis derived from Putin's war consistent with a greater crisis that we have behind us, which is the climate emergency," Sánchez settled, reproaching Abascal for not defending the interests of the class average and hard-working, but "of those of above".

In his speech, the leader of Vox has warned that the hardest winter "in decades" is coming for the Spanish, with families "gripped" by the loss of purchasing power, the rise in inflation, an "abusive" tax pressure and unfair" or "unpayable" gas and electricity bills for the average income and workers.

For this reason, he believes that the Executive must give an explanation about the "propaganda" against nuclear power plants or the blowing up of thermal power plants. And he has claimed that the solution could be immediate through the reopening, for example, of the Garoña plant or the immediate repeal of the Climate Change Law, which he sees as "suicide" for the Spanish.

"Ask the people, the one you see in photos, use article 92 of the Constitution and consult the Spaniards if they want more expensive energy or want to explore their own natural resources," Abascal challenged in line with the 'Spain Decide' plan that Vox promotes for the convocation of a series of referendums on issues that it considers "fundamental" and on which it believes that citizens have not been able to pronounce themselves.

However, Sánchez has ruled out these solutions and explained that the Government is working to deal with two crises, the energy consequence of the war in Ukraine - sharing concern about the evolution of prices and their impact on the shopping basket - - and the climate crisis. "And both responses have to be consistent," she stressed.

In this sense, he has questioned whether Vox really defends Spain. And he asked if he defends his countryside, which is "deserting as a result of climate change", its rivers, which are running out of flow, or the air of Spain, which "is taking more and more lives".

In Sánchez's opinion, Vox "is determined" to opt for energies "that come from other countries" instead of betting on those native to Spain, such as renewables, the sun and the wind. "You do not defend Spain, you defend other interests, the interests of those from above", she has reproached.

And he took the opportunity to also criticize the Popular Party: "Seeing what has been seen, there are clearly two right-wing parties in the political system, one right that denies climate change and another that does not say it does not exist but acts as if climate change did not exist, which is the People's Party".

‹ ›
Keywords:
Pedro SánchezSantiago AbascalVOX
Your comment has been forwarded to the administrator for approval.×
Warning! Will constitute a criminal offense, illegal, threatening, offensive, insulting and swearing, derogatory, defamatory, vulgar, pornographic, indecent, personality rights, damaging or similar nature in the nature of all kinds of financial content, legal, criminal and administrative responsibility for the content of the sender member / members are belong.
Related News