Accompanied by María San Gil, he explains that he has "an outstretched hand" to the PP to form an alternative to Sánchez, but "firmly". 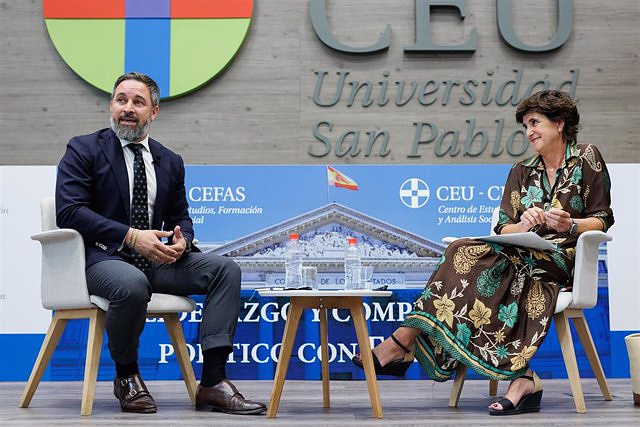 Accompanied by María San Gil, he explains that he has "an outstretched hand" to the PP to form an alternative to Sánchez, but "firmly"

The president of Vox, Santiago Abascal, has acknowledged this Tuesday that he feels "away" from the policies and public statements of the leader of the PP, Alberto Núñez Feijóo, and has made it clear that there can never be a government in the Moncloa Palace that has the simultaneous support of Vox and the PNV.

Abascal has participated in a talk at the CEU San Pablo University moderated by the former leader of the Popular Party María San Gil, who has applauded many of his proposals and has presented him as a "great hope" for Spain.

In this context, the leader of Vox has explained the reasons that led to his departure from the PP, among which he has pointed out the statutory reforms or his position regarding the victims of ETA, and has criticized numerous policies of former Prime Minister Mariano Rajoy.

As for the current leader of the 'popular', he has acknowledged that he does not know him personally nor has he ever spoken to him, so he is still waiting to find out "what he wants to do with Spain" when they have the opportunity to hold a meeting.

At the moment, he has acknowledged that he feels "a little distant" from his policies and public statements and has directly pointed to Feijóo's language policy and his motto of "cordial bilingualism". "I understand that Feijóo is uncomfortable with this debate given the linguistic policy that he has applied in Galicia", he has slipped.

In any case, he has been "convinced" that they will be able to speak "normally" even if they do not become friends or even get along. "But that is not the important thing", he stressed, emphasizing that the main thing is to offer the Spanish an alternative to the Government of Pedro Sánchez.

Thus, Abascal has underlined the need to present an alternative and not a mere alternation in power and has said that this will be easier if Vox has enough votes to be able to condition the policies of the 'popular' or even be the first force. "Now it doesn't seem like it in the polls but we're not throwing in the towel," he guaranteed.

"I am very hopeful, I think that the Spaniards have a great desire for change", he said with an "outstretched hand" to the PP, yes, "from the firmness and convictions so that there is an alternative, not a simple replacement".

At this point, he has warned that there can never be a government in the Moncloa Palace that has the simultaneous support of Vox and the PNV. And he has explained that it is a postulate included even in the statutes of Vox, which prohibit any pact with "separatist" parties.

"Now they want to get closer to the PNV. But with the PNV a government cannot be made in Spain, and above all it cannot be done with the PNV and with Vox, that is incompatible," he warned Feijóo.

In addition, he explained that in his opinion the leader of an organization must be a loved and respected person who bases his relationship with his subordinates on respect.

‹ ›
Keywords:
FeijóoSantiago AbascalPNVPPVOX
Your comment has been forwarded to the administrator for approval.×
Warning! Will constitute a criminal offense, illegal, threatening, offensive, insulting and swearing, derogatory, defamatory, vulgar, pornographic, indecent, personality rights, damaging or similar nature in the nature of all kinds of financial content, legal, criminal and administrative responsibility for the content of the sender member / members are belong.
Related News