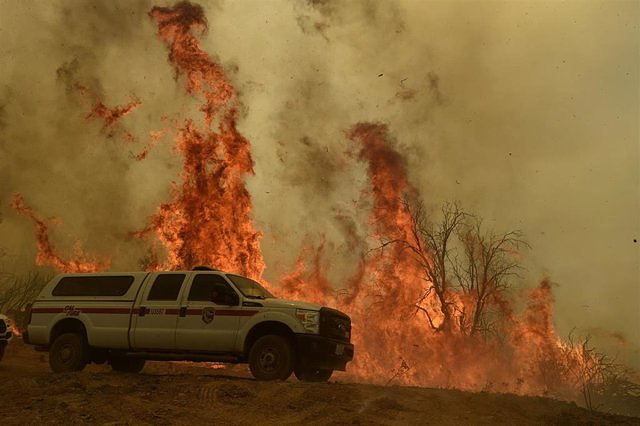 A forest fire in the north of the state of California, in the United States, active since Friday, has left at least two dead after devastating 22,257 hectares and causing a red alert that already affects more than two million people.

The two victims were found in a car around 10 a.m. local time off Highway 96, according to a statement from the Siskiyou County Sheriff. "We believe they were trying to proceed with the evacuation," said office spokeswoman Courtney Kreider, according to The Wall Street Journal.

At least a dozen residences have burned since the fire broke out Friday night in the Klamath National Forest near the California-Oregon border, forcing the evacuation of some 2,000 residents.

High temperatures in Northern California and the Pacific Northwest have caused instability in the atmosphere that can trigger sporadic thunderstorms, according to the National Weather Service, as reported by Bloomberg.

"These conditions can be extremely dangerous for firefighters as the winds can be erratic and extremely strong, causing the fire to spread in any direction," forest service officials said in a news release. the CNN network.

‹ ›
Keywords:
Estados UnidosIncendioIncendios Forestales
Your comment has been forwarded to the administrator for approval.×
Warning! Will constitute a criminal offense, illegal, threatening, offensive, insulting and swearing, derogatory, defamatory, vulgar, pornographic, indecent, personality rights, damaging or similar nature in the nature of all kinds of financial content, legal, criminal and administrative responsibility for the content of the sender member / members are belong.
Related News