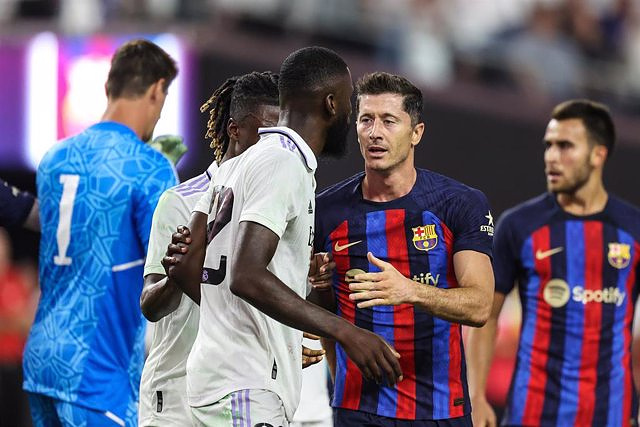 FC Barcelona will put an end to the American tour this Sunday (at 1.00 in the morning) in their fifth friendly match of the pre-season against New York Red Bull, a match where the azulgranas will try to finish off their good feelings before returning to the city county to dispute the Joan Gamper Trophy.

The Big Apple will host the penultimate test for Xavi Hernández's team before LaLiga Santander kicks off. And he will do it with a fan base dedicated to his idols, who have laid the foundations for the new 'culé' wardrobe on North American soil, a functional mechanism between the newcomers and those already settled.

The illusion of Barcelona is through the roof with the new reinforcements and the good role displayed in the preparation matches. A renewed air in which Xavi seems to have found the key, so his team has won three games and drawn one in their preparation.

Ousmane Dembélé and Raphinha have focused their attention on their battle for the title. While the Brazilian shone immediately after his arrival, with his first goal in the win (0-6) against Inter Miami and his decisive goal (0-1) in the Las Vegas Classic against Real Madrid, the 'Mosquito ' was the author of two goals and the best in the third game against Juventus in Turin (2-2).

Another of the proper names of FC Barcelona is Robert Lewandowski, who continues to acclimatize himself to the 'culé' philosophy in his set-up as the main reference in attack. Against New York Red Bull he will look for his first goal to crown his first weeks as a Barça player.

Xavi will once again give minutes to central defender Araujo and midfielder Pedri, who rested against Juventus. In addition, the Bosnian Pjanic, one of the surprises of the preseason, will try to continue earning the trust of his coach, as he already did against his former team with a display of resources with the ball. All this with the aim of earning a place in the coveted squad.

The Catalan team will see its solidity and another chapter in the emotional rise of the club against the New York Red Bulls. Striker Ferran Torres could have his first minutes of the preseason due to a foot injury, although the club are cautious about the attacker's recovery.

In front they will have the third-placed Major League Soccer (MLS), a team in which Thierry Henry and Rafa Márquez have played, the latter the current coach of the subsidiary. A duel that will test the players in their wide competition to be part of the eleven.

The last preparation match will be on August 7 at the Joan Gamper Trophy against Pumas Mexicano, where the fans will welcome the squad made for the 2022/23 season at the Camp Nou, in the absence of any more arrivals materializing and release other players before August 31.