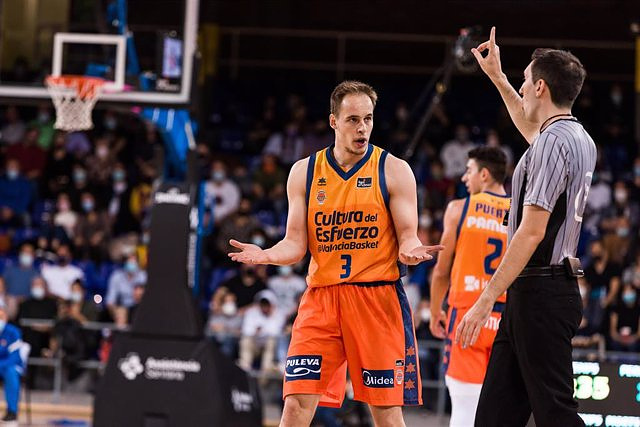 From more to less, those from Mumbrú fall to Zalgiris in their fourth straight defeat

Valencia Basket suffered a painful defeat (76-80) against Zalgiris Kaunas on the tenth day of the Euroleague due to not managing the last few minutes well, a blackout in La Fonteta with which they fit their consecutive defeat letter.

Álex Mumbrú's team went from more to less, losing success, fortune and concentration in the fourth quarter. Zalgiris, which is now 6-4 among the best in Europe, also had its mistakes, but Valencia failed more in a tight finish.

The 'taronja' team, 4-6 in the table, corrected the poor staging of recent matches and even left a complete first half without seeing it fully reflected on the scoreboard (44-37). That was especially the feeling of the first quarter, where the locals scored six triples and dominated all facets of the game.

At the pace of Chris Jones (19 points), Valencia went up from a timeout (27-17), erasing their rival until some losses that spoiled the set. The local team did not finish rounding off its work in any quarter and that ended up weighing on the final confidence. In the second set the accuracy dropped.

Those from Mumbrú threatened another break (40-30), but those from Kaunas did not throw in the towel. The 'taronja' team missed Jones and survived in the third quarter with the irruption of Harper, but the game was already pick and shovel. In the Lithuanians, Smits was still in tune and the one who woke up was Evans (18 points).

Without that success, except for Harper, the locals tightened in defense to hold an increasingly low income. The Spanish jam in the last quarter soon gave the Lithuanians control, until Jones returned to action and Prepelic retaliated with his first triple (71-67), but the rush did not continue.

Valencia finished off in attack with four minutes without scoring, an impossible mission that, despite the fact that Zalgiris forgave, led to defeat without remedy. Ulanovas' free kicks were the slow end for a Valencia that hit a new bump like the one that happened at the start of the season.