Unai Simón: "We trust our idea and we will continue to the death with it as far as we go" 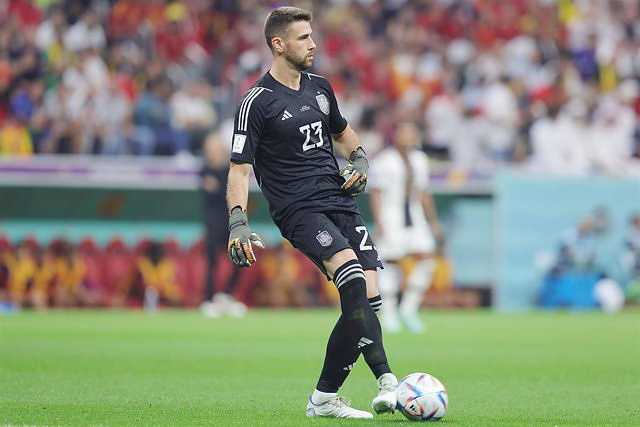 The goalkeeper of the Spanish team Unai Simón defended the way to "create superiority from behind", even with the goalkeeper participating in possession, as well as stressed that they will continue "to the death" with their game idea, "hopefully until the final".

"The one they put as a favorite is not always the one who ends up winning the World Cup. We trust our idea, well marked and very characteristic and we will continue to the death until we get there, hopefully it will be the final", the goalkeeper wished at the press conference prior to the duel this Thursday (8:00 p.m.) against Japan.

This is how the Athletic goalkeeper responded to whether Spain can carry the favorite sign after their first two games in the tournament, although he was convinced that they were "being the best" team "in possession and having the initiative." "Few can compare to our game," he insisted.

"In this team, superiority has always been created with the goalkeepers. When a player jumps me, there is already a free player and from then on we already have superiority. It is important to have superiority from behind. We are going to have to be very focused", He commented on the involvement of the goalkeeper in the initiation of possession in the selection.

A way of playing that Simón understands that "it can generate tension", although for him "it is not a risk". "I understand that it is seen as risky situations that the striker is three meters from the goalkeeper, but it is what the coach wants and he has convinced me, I feel comfortable," he argued.

"It's what this team plays, I understand it that way. I've gotten used to playing this way, the whole team trusts the goalkeeper. I wouldn't consider it a risk, the other day we lost only four balls in initiation. I have to continue improving, but I act normally and with full confidence in this way of playing", he added.

In these plays, as in the stops, it affects the ball with which each tournament is played. In Qatar, it is from the Adidas brand, while in other competitions it is from other firms. "Honestly, it's something that doesn't depend on me. In the League of Nations we played with the Puma ball when I debuted, in Portugal with Nike, the rest with Adidas... In the end, you don't care a bit. You're not going to see me complain about a ball", explained the goalkeeper, who confessed to being in a moment of "full confidence".

"I don't know if it's my best moment, I think so, but I try to keep learning, I'm still young. I'm still progressing, this is not my limit, I have a lot of room for improvement," he said about his performance.

The next rival will be Japan, a team that "will apply high pressure" thanks to its "quick" reorganization. "They work very well collectively and they know that they have to score a goal, because we usually score, to score points", analyzed the goalkeeper, who hopes to experience one of the most important games of his career, as he already did against Croatia in the last Euro Cup. -when he made a mistake in leaving the ball that cost him a goal-, although "not for a similar reason" to the one against the Balkans. "I learned from that game, although I don't want to think about it too much," he settled.