The women's team and Salma Paralluelo feast on Argentina 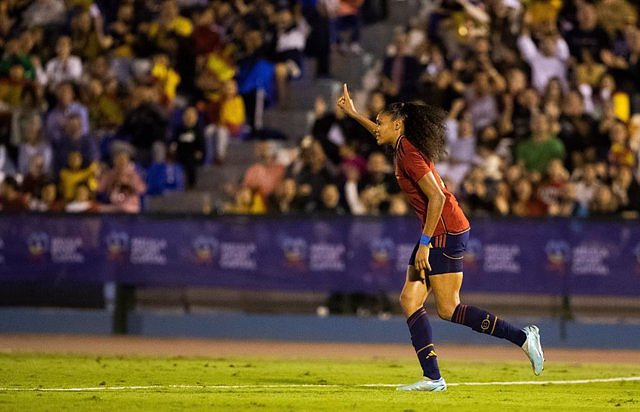 The Spanish women's soccer team won a resounding victory this Friday in the friendly against Argentina, a rival they thrashed 7-0, driven by the power of debutant Salma Paralluelo, who finally debuted with the 'Red' scoring a triplet.

There was not much history in the Municipal Álvarez Claro de Melilla, where the team led by Jorge Vilda, with many new internationals, clearly dominated the first of the two friendlies. Next Tuesday, at La Cartuja in Seville, expect more fight from Japan.

Spain did not find too much opposition in the albiceleste, a team that will also be in the next World Cup in Australia and New Zealand and that was third in the last Copa América. Supported by his technical quality, his high and aggressive pressure and the speed and depth he found on the flanks, where he hurt a weak Argentine defense.

The first goal came in the 20th minute, after a steal by Oihane Hernández, with a possible foul, and a great pass by Maite Oroz that Alba Redondo did not spare to open the scoring and definitively unleash the game in her favor, supported by speed by Salma Paralluelo.

The FC Barcelona striker, who fell due to injury at the last minute of the European Championship and who had not been able to enter the first two lists due to her presence in the U-20 World Cup and due to physical problems, became the protagonist ever since.

After a warning with a powerful shot from the Aragonese that grazed the post, it was 2-0, the work of Oroz after a nice maneuver by Marta Cardona. And Argentina was dismantled then, with an offensive carousel that it could not stop and that ended with two more goals, both signed by Paralluelo, one pushing a gift from Cardona and the other with a powerful shot with some help from goalkeeper María Correa and of Cometti, who failed in his clearance.

After going through changing rooms, the script did not change too much. Argentina, who had only threatened in the first half with a well-stopped header by debutant Enith Salón, continued to be unable to counteract Spain's superiority and could not avoid a bigger win.

Salma Paralluelo once again showed her physical qualities to close her triplet and go to rest shortly after, and Athenea del Castillo, one of the many replacements in the second 45 minutes, also joined the party after a shot by Fiamma Benítez hit the post. Another Sub-20, Inma Gabarro, Golden Boot in the World Cup, closed the win after another concession from the albiceleste defense.