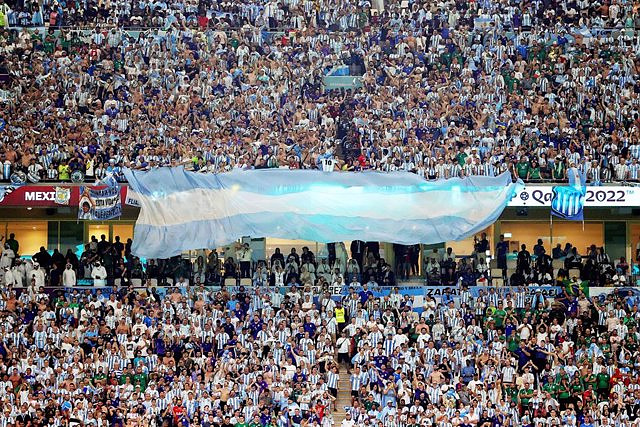 The stadiums of the World Cup in Qatar have registered during the first day of the group stage of the tournament an average attendance of 94 percent of their total capacity, according to data published by FIFA.

The report from the governing body of world football also reveals that the match with the most spectators in the stadium was the Brazil-Serbia (2-0) at the Lusail Stadium, on November 24, with 88,103 people in the stands. On the same day, the FIFA Fan Festival at Doha's Al Bidda Park also achieved its highest ever attendance ever, with a total of 98,000 fans throughout the day.

The multinational and multicultural football festival is projecting all the matches of the FIFA World Cup on giant screens, as well as providing free entertainment with concerts by the most famous artists on the international music scene.

In addition, FIFA also celebrated an increase in television audiences, compared to the tournament that was held in Russia in 2018. The opening match between Qatar and Ecuador drew an average of 3.3 million viewers, with a peak of 3 6 million and which represents an increase of 109 percent in the audience figures of the opening duel four years ago.

In addition, the audiences for that first game grew in South America, with a 50 percent screen share on TV Globo (Brazil) or a 62.5 share on Caracol TV (Colombia). In Europe, there has also been an increase, with growth of 57.5 percent more than the inaugural in Russia the increase of 30 percent that was experienced in France.

The broadcast of the Netherlands - Senegal this Monday had a screen share of 74.5 percent on the Dutch network NPO1 and the audience of 4.16 million was the highest in the month of November and for the day. While Wales' first World Cup match since 1958 was broadcast on ITV throughout the UK, attracting an audience of 7.8 million, with a 43 per cent share in Wales.

France launched their world title defense with a 4-1 win over Australia, and French channel TF1 had its highest audience of the year, with 12.53 million and a peak of 14 million, and an audience share of 48 ,1 percent.

‹ ›
Keywords:
Fifa
Your comment has been forwarded to the administrator for approval.×
Warning! Will constitute a criminal offense, illegal, threatening, offensive, insulting and swearing, derogatory, defamatory, vulgar, pornographic, indecent, personality rights, damaging or similar nature in the nature of all kinds of financial content, legal, criminal and administrative responsibility for the content of the sender member / members are belong.
Related News