Spain takes advantage of the stop in Jordan

Spain takes advantage of the stop in Jordan. 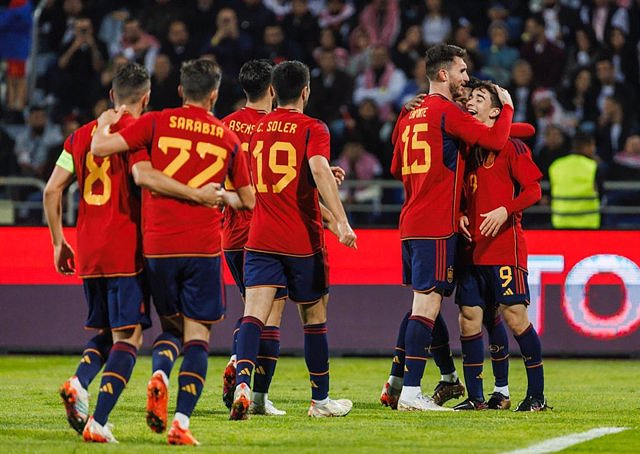 Spain takes advantage of the stop in Jordan

Gavi, Asensio, Ansu Fati and Nico Williams stand out in the last rehearsal before the World Cup

The Spanish soccer team beat the Jordanian team (1-3) this Thursday in a friendly six days after its debut in the Qatar 2022 World Cup, well used although without fanfare in Luis Enrique's team, with changes and tests and an outstanding quartet.

Gavi, Asensio, Ansu Fati and Nico Williams left the best details of the match, the worst were in defense, for a Spain that next Wednesday will make its debut in the World Cup against Costa Rica. The Amman International, with a temperature 20 degrees lower than what awaits them in Doha, left a competitive game although with its moments of disconnection.

Luis Enrique's team is gradually spreading World Cup fever, with goals from Ansu Fati, who had not played for Spain for two years, after 13 minutes, and Gavi, at the start of the second half. Ferran forgave several in the second half, Nico Williams sentenced at the end and a 'touched' Álvaro Morata did not play.

'Lucho' showed his confidence in Fati and the Barça striker, without a place in Xavi Hernández's eleven, thanked him by sending the first one he had into the net. Spain connected quickly in the center of the field, with Soler and Asensio, and the striker did not forgive with some help from the rival goalkeeper. An error by Pau Torres gave the locals the option.

Al-Naimat forgave point-blank against Robert Sánchez, the clearest of his team in the entire game and 'La Roja' responded with a good option from Sarabia. Jordan had its moment due to these doubts behind the Spanish, but Asensio and Gavi took the controls. The handling of the ball by both gave their own a lot of outlet and the superiority that could be guessed before the match.

The last pass was missing and a little more punch from Asensio himself and Ansu Fati, but with homework headed to the locker room. However, the return was not the best in Spain, with Al-Naimat becoming a real nuisance. At that moment of a certain lack of tension, Gavi caught a ball in the area, after a good play by Soler, for 0-2.

Luis Enrique started with the rotation, in defense and attack, jumping onto the field Azpilicueta, Jordi Alba, Yeremi Pino, Ferran, Dani Olmo, Rodri and Nico Williams. The Athletic man made it 0-3 in the final stretch, a Nico who was intense demonstrating the qualities that can help 'Lucho' to break the rival on the wing.

Meanwhile, Ferran's aim failed, but Spain dominated without discussion and looked for the rival goal in a friendly classic before a big event: a win and high confidence, although with some warning. The 2010 world champion left Azpilicueta one last mistake that led to the 1-3 defeat of Al Daradreh. Spain knows that the renewed dream of going far involves bringing out the best version of the 26 since Wednesday and in a Group E with Germany and Japan as well.