Spain excites and convinces with a historic win

Spain thrashes (7-0) and convinces in an exciting debut. 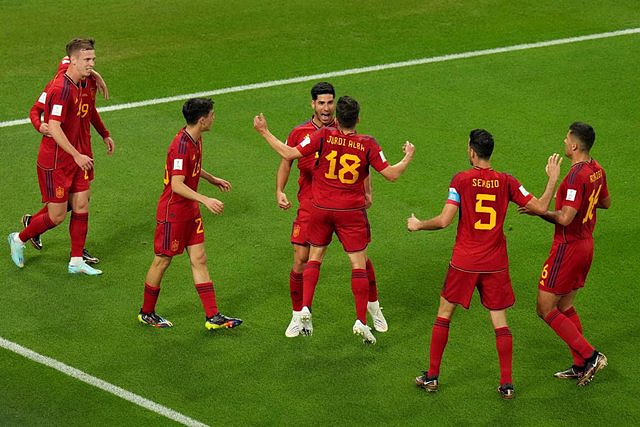 Spain thrashes (7-0) and convinces in an exciting debut

The Spanish team thrashed Costa Rica (7-0) this Wednesday in an exciting and convincing debut at the World Cup in Qatar, with goals from Dani Olmo, Asensio, Ferran Torres, Gavi, Carlos Soler and Álvaro Morata, and a combinative style At the same time sharp, it hurt a poor Costa Rican team and allowed 'La Roja' to reach the top of Group E.

Luis Enrique experimented with Rodri as a center back together with Laporte and the test went well for him, as well as Asensio as a false '9', without Morata. The Balearic Islands and Pedri are the main actors in a film with the expected script. Faced with a somewhat hermetic defense from Costa Rica, Luis Enrique's men were at ease, always owners of the ball, to complete a brilliant staging with an overwhelming first half hour.

A display of power and effectiveness that Dani Olmo began with a Vaseline aesthetic, which was followed by an accurate shot from the Balearic Islands and Ferran from a penalty. After the monologue of the first part, he entered with the same impetus in the second bet, to make another four and sentence a match with absolute Spanish dominance. After three editions without winning in the debut, Spain won for the fifth time in its debut in its history in the World Cups.

The game began along the expected lines, with Spain having the ball and patiently finding holes in the compact system of the Costa Ricans. 'La Roja' caused fear from the beginning after a long combination, thanks to an omnipresent Pedri who filtered an air pass to the right to find Dani Olmo, but he finished off something deflected, on the first dangerous occasion for Luis Enrique's men.

The young Barça midfielder became the owner of the construction from the initial whistle. Another great opportunity came from his boots, leaving only Asensio in the area with a subtle touch, but the Real Madrid player did not finish off squarely and his shot grazed the post. And after two clear warnings, Spain took advantage of its superiority and the third time was the charm in the siege on the Costa Rican wall.

Dani Olmo picked up a service from Gavi on the front line to turn around in an agile manner and beat Keylor Navas with a beautiful chip inside the area to overtake Luis Enrique's men and put the debut back on track. Far from slowing down, Spain continued to squeeze the Ticos with the ball always as a 'friend' and halfway through the first half, Asensio made it 2-0 in his outstanding role as false '9'.

The Spaniard finished off a low cross from Jordi Alba at the first touch, very prominent on the left, at the back of the net, impossible for Keylor. Costa Rica was always very uncomfortable, with Unai Simón who was just another spectator. The gear of the selection worked like a charm and in the umpteenth internship of Jordi Alba the winger received a blow to the ankle inside the area that the Emirati referee designated as a penalty. Ferran was in charge of making it 3-0 from eleven meters in half an hour into the game.

Already in the second half, Spain cut any intention of rebellion of the Ticos with the 4-0, the work of Ferran Torres to complete his particular doublet. The attacker had faith and hunger to continue a play inside the area that seemed already controlled by the defense, not very forceful, of Costa Rica and he beat a misplaced Keylor Navas with his left foot.

After this goal, Luis Enrique made the first changes, resting '11' and Pedri, to bring on Carlos Soler and Álvaro Morata. The rojiblanco striker had a couple of chances, but the changes, including Alejandro Balde and Nico Williams, gave Spain more peace of mind that maintained a very high pace throughout the first hour of play.

Costa Rica stretched and Morata had more spaces, in one of them he was able to assist Gavi with 15 minutes remaining for the midfielder to define dry at the first touch to complete the Spanish 'little hand'. With this goal, the Barça midfielder became the youngest goalscorer in the history of Spain in the World Cups, at 18 years and 110 days.

'La Roja' finished bloodying the Ticos with another two goals from Soler, arriving in the second row with a powerful shot, and Morata, with a typical 'killer' target, surpassing Fernando in the table of all-time scorers in Spain Morientes with 28 goals.