Rodri: "We panicked because we were out against Japan"

"It was a touch of attention that suited us very well". 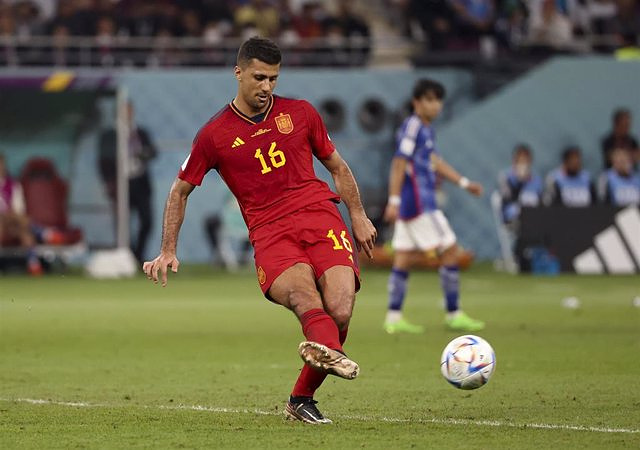 "It was a touch of attention that suited us very well"

The Spanish international Rodri Hernández has acknowledged that the players felt "panic" during the three minutes in which they were out of the World Cup in Qatar after the "collapse" in Thursday's defeat against Japan, but has assured that the "wake-up call" It has been good for them and he recalled that "this team always gets up in difficult moments".

"Once the phase is over, it doesn't matter what you have done, a new competition begins. After each game there is always an analysis of what can be improved. They were ten minutes of collapse, I would sum it up like this. We must already be warned that already it can't happen again. We have learned, the coach has been clear and the players have assumed responsibility. We are training with happiness and wanting to be in the next phase", he declared at a press conference.

Now, he assures that they are "fully recovered". "It was a bit of an intense moment, because the team went out to win, with ambition. We controlled the first half and the game slipped away from us in ten minutes. From then on, turning it around was very difficult, because they closed up. We suffered It was a bit of a panic at being out, but in general terms we deserved to be in the next phase. It was a touch of attention that came in handy for us. The team is already recovered and eager to face these eighth rounds with the utmost enthusiasm", pointed.

"It was not a pleasant feeling. The coach said it: in each and every one of the games we have been first in the group, and there were three minutes in which we were out of the World Cup. Germany was out for almost the entire group stage. We did not come out to speculate, we went out to win. When we wanted to realize it, it was complicated; they locked themselves up a lot and we lacked a bit of fluidity and finesse. Luckily then I saw the score again and we were second", he continued.

In another order of things, the Manchester City footballer explained that the errors in the departure of the ball in the duel against the Japanese will not change the way they play. "The players learn from mistakes, we will try not to make them again, but we are not going to change our way of playing because we fail. Soccer is a mixture of two things: you fail and the opponent succeeds. They were very intense under pressure and we are wrong in some actions that we have corrected. It is not convenient for Spain to change the way they play. We are going to try to continue with our philosophy no matter what happens. The games are one game and the details are going to make the difference, so let's We will take risks but with a cool head," he said.

"We have a philosophy that we never change, but that does not mean that it is not necessary to take risks either; there are times when there are balls that it is more intelligent to play long, and that is transmitted to us by the coach, he does not ask us to go out creating walls and pipes at all from behind. This is a World Cup, the differences are very small. He gives us total confidence to risk when we have to risk. It's our philosophy and we're going to continue that way," he continued.

In this sense, Rodri assured that "the instruction" of Luis Enrique "is clear", which is to "create superiority from behind", although he gives them freedom to clear in case there is a risk. "It's the best way for the team to prosper and not lose the ball; that doesn't mean taking risks when it doesn't play. You have to balance what you can gain by taking the ball out in a situation of maximum tension or what you can lose with a goal. Many times you have more to lose than win," he said.

"In those situations, a long ball is played and the pressure is changed, but that does not change the fact that our way of playing is to try to get the ball from behind due to the characteristics of our players. We are intelligent and we know when we can take risks and when not The other day we were not successful, we should have risked less, but the team has learned", he added.

On the other hand, Rodri rejected the idea that they go for the easy side of the box. "A walk will not be. It is the one that has touched us and we deserve for being second. Morocco touches us and we do not think of anything else," he said. "We bet on ourselves, but we don't think too far. The match we have is quite complicated to think about reaching the final. We are going to focus on Morocco, because it will be a very demanding match. We'll see where we get to," he said.

In addition, he recalled that "championships are won by 26 players, not one." "Each team has its weapons, we have great soccer players, our strength is the group, it's the greatest strength a team can have," he said. "We are not afraid of failure, we have ambition, enthusiasm and the desire to continue in this World Cup. We have reached the round of 16 and now we have a wonderful match ahead of us, and we hope that all Spaniards enjoy a good game and victory of Spain", he stated.

He also recalled "the example of the Eurocup" to highlight that "this team always gets up in difficult times." "The day in Germany there was a bittersweet feeling; when you go ahead and tie or turn the game around, the feeling is a bit bitter. No team has won all three games, all have had difficulties. There was seriousness, but up to date The next day we were already with the mentality that we were alive," he said.

Regarding Morocco, he confessed that "still" they have not "analyzed" it. "It was first in its group, quite complicated, it has left teams like Belgium out. It has a very high individual quality of players and at a collective level it works very well. It will be a very tough and very even match. We will have to have a great day to beat them," he stressed.

Finally, he valued his new role as center back. "My role is the same as that of any center-back: push from behind, get the ball out well, order the team, give it consistency and solidity," he analyzed. "Each player has his characteristics, and I try to help the team in getting the ball out, so that we can link passes, filter balls... The teams present us with games with very few spaces between the lines, which we are not used to," he concluded. .